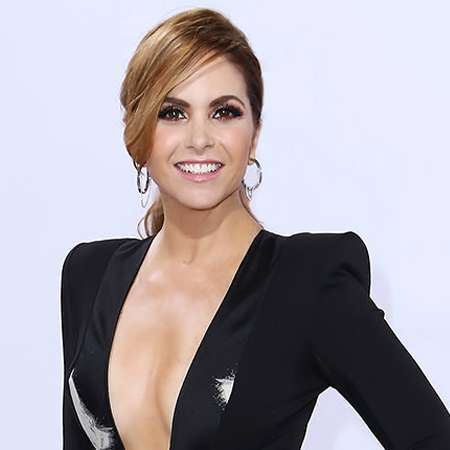 Lucero Hogaza León was born on August 29, 1969, in Mexico City, Mexico as Lucero to Lucero León and Antonio Hogaza. Lucero has one brother named Antonio. Lucero went in the television arena at a small age. Lucero’s career began in 1980 when she was the tender age of 10. She was offered by Televisa to appear in a juvenile theme program titled Alegrías De Mediodía. She thus starred in her first telenovela in 1982 which was produced by Valentín Pimpstein titled Chispita dubbed as Little Spark in English. In 1983, she starred in her first film called Coqueta. Since then she has seen in films like Delincuente (Delinquent), Fiebre de Amor (Love Fever), in 1987 in Escápate Conmigo, in 1988 in Quisiera Ser Hombre, Manuelita/Manuel, in 1990 Deliciosa Sinvergüenza as Lucerito, in 1999 in Tarzan voicing as Jane, in 2004 in Zapata: El Sueño De Un Héroe as Esperanza. Till date she has been seen in telenovelas like Chispita, Cuando IIega el Amor, Los Parientes Pobres as Margarita Santos, Lazos de Amor, Mi Destino Eres Tú, Alborada, Mañana Es Para Siempre, Soy Tu Dueña, Por Ella Soy Eva.

In the year 1999, Lucero was a cast in the movie Tarzan sharing the credits with Tony Goldwyn, Minnie Driver, Glenn Close, Alex D. Linz, Rosie O'Donnell, and Brian Blessed.

Lucero's Net Worth And Earnings

Lucero has collected a large amount of sum from her singing career but the exact amount of net worth is still under review which as per some sources is believed to be over $5 million.

Lucero Hogaza León does not have a long dating history. On January 17, 1997, Lucero got married to singer Manuel Mijares. The couple have two children named José Manuel born on November 12, 2001, and Lucero born on February 2, 2005.

It was announced on On 4 March 2011 that the two separated after 14 years of marriage.  Following their divorce, the singer is dating boyfriend Michel Kuri. She was under a lot of controversies when she was criticized for posting her photo with Kuri in front of an alleged dead animal after a hunting activity. Due to the controversy, she could not perform at the International Festival Viña del Mar 2014 in Chile.

Lucero is currently seen in the public with Kuri.