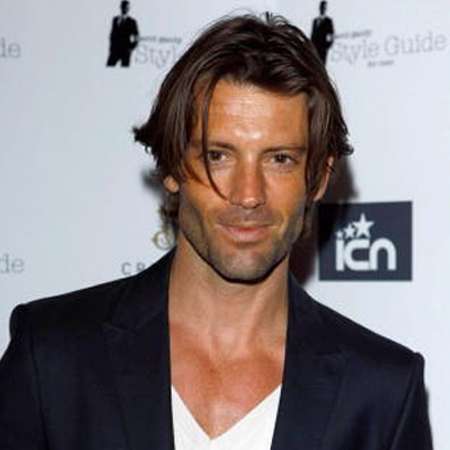 Louis Dowler, an English actor/model, known for his works in several films and commercials. Dowler has also worked for the Burberry model campaign. He, however, mostly grab attention from his personal life, whether for his affair with Oscar-winning actress Kate Winslet or marriage with actress and author Jennifer Esposito.

Who Is Louis Dowler?

Louis Dowler was born in 1975, in Penzance, United Kingdom. He was raised in his birthplace along with his parents.

His parents were British and he belongs of Native English descent. He is of English nationality and belongs to Caucasian ethnicity.

Louis Dowler has been featured in several model events and fashion events including the Burberry model campaign. He has also worked for many worldwide brands as a cover model. Louis has also been featured in many fashion magazines on the cover page.

In 2013, he and his then-wife Esposito opened the celiac-friendly bakery 'Jennifer’s Way' in West Village in Manhattan. The cafe provided "gluten-free, dairy-free, soy-free, sugar-free" food for people like Jennifer suffering from autoimmune disorder celiac disease.

The place, however, shut down following their divorce and a messy lawsuit in 2016. As of 2021, he works as a real estate agent for Compa s s.

Relationship Status: Is He Dating After A Divorce With Jennifer Esposito

As per the reports, Dowler is possibly single and is quite focused on his growing career. Though, some sources, claim that he is engaged to a mystery woman there is no official confirmation. His estranged wife Jennifer Esposito filed for divorce with him in March 2016. Dowler and Esposito got married on November 16, 2014, in New York City in a private event where his family and friends attended the ceremony.

CAPTION: Former couple Louis Dowler and Jennifer Esposito attending an event together. They got married on November 16, 2014, and divorced after two years in 2016. SOURCE: Daily Mail

They dated almost two years before getting married in 2014. The two started dating in 2012 and after two and half years of relationship, the duo got engaged on 1st May 2014. The reason for their separation is not revealed to the media.

Prior, Louis was in a relationship with superstar American actress Kate Winslet. Louis started a relationship with her in 2010. They separated only after a year in 2011, following a very messy breakup. He publicly claimed his girlfriend Winslet of cheating on him and breaking his heart. He revealed that they started having problems after their visit to business magnate Richard Branson's estate on Necker Island, where she met Branson's nephew Ned Rocknroll.

Previously, his ex-wife Jennifer Esposito was married to Bradley Cooper from 2006-07. In May 2007, after five months of marriage, they filed for divorce which was finalized in November 2007. In 2009, she was engaged to Australian tennis player Mark Philippoussis, but the pair separated only after a year in 2010. As of 2021, Esposito is married to Jesper Vesterstrøm.

The 6 ft tall, Louis Dowler has made a considerable amount of fortune. As per estimation made by various authorized online sources, his net worth is $1 million as of 2021, but his salary is not updated yet.

In 2016, he filed a lawsuit against Jennifer along with other investors of the 'Jennifer’s Way Bakery". He claimed that the actress used her popularity to influence the customers to not visit the place as she was not involved with the business. On the other hand, Esposito claimed that she was blindside by the investors and was pushed out of her own company.

On the other hand, his ex-wife, Jennifer Esposito has a net worth of $4 million. The actress has racked up such a good amount of wealth from his work in movies and TV shows. She also owns a house in New York City.