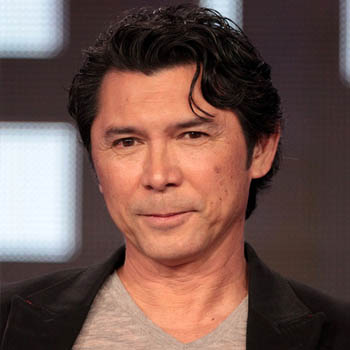 American actor, movie and television director, Lou Diamond Phillips is eminent for his acting ability in movies like La Bamba, Stand and Deliver and The King and I. Viewers are bowled over Lou’s bad-boy roles. Lou has starred in many movies for which he has been noted as well with awards like Independent Spirit Award, Blockbuster Entertainment Award, Cinemanila Film Festival Life Achievement Award and many more. For his acting in La Bamba, Lou was nominated for the prestigious Golden Globe Award. Lou has been seen in TV Series as well. Lou has directed many TV Series like The Outer Limits, The Twilight zone and is in the process of directing Tao of Surfing. Lou was also an executive producer for the drama Dakota. Lou undoubtedly has had a great past in his filming career and his viewers are excited to see more of him in the near future.

Phillips was born as Lou Diamond Upchurch on February 17, 1962, in the Philippines, Subic Bay Naval Station. Lou’s ethnicity is a mixture of Scotch-Irish and Filipino Spanish. Lou is of American nationality. Lou is the son of Lucita Umayam Aranas and Gerald Amon Upchurch, an officer in the United States Navy. Lou was named after marine legend, Leland “Lou” Diamond by his parents. Later after his father was dead, Lou took up his stepfather’s surname “Phillips”. Lou was raised in Texas. While in Corpus Christi, Texas Lou attended Flour Bluff High School. Lou graduated from Flour Bluff in 1980 after which he attended the University of Texas at Arlington. Lou graduated with a BFA in Drama.

Lou was certain that he would join the film industry and was moving ahead towards it with his first movie Interface in 1984. He was not much credited for his minor role. Then in 1986, Lou starred in the low-budget film Trespasses. In 1987, Lou was seen in an episode of Miami Vice. Later in the same year, Lou made his major breakthrough in his acting career by starring as character Ritchie Valens in the American biographical film, La Bamba.

In the same year, Lou was seen in the TV Movie; The Three Kings. In 1988, Lou starred in the movie Young Guns, for which he and the crew received 1989 Western Heritage Award Bronze Wrangler Theatrical Motion Picture. In the same year, Lou starred in the movie, Dakota as character John Dakota. Then he performed as character Angel Guzman in the movie Stand and Deliver, for which Lou was highly noted and thus he earned a 1989 Independent Spirit Award for Best Supporting Male.

For his performance, Lou was also nominated for the prestigious 1989 Golden Globe Award for Best Performance by an Actor in a Supporting Role in a Motion Picture. In 1989, Lou did two films, Disorganized Crime, and Renegades. In 1990, Lou appeared as various characters in movies like Young Guns 2, A Show of Force, and The First Power. From 1993-94, Lou appeared in movies like Shadow of The Wolf, Extreme Justice, Wind in the Wire, Dangerous Touch, Sioux city, Boulevard.

Lou was also seen in a short film, Override. In 1996, Lou diamond made his Broadway debut as the king in the musical, The King and I for which Lou earned 1996 Theater World Award, 1996 New York Outer Critics Circle: Outstanding Broadway Debut Award of an Actor and Drama Desk Award. Lou was nominated for 1996 Tony Award for Best Actor on Broadway. Then in the same year, Lou starred in the film, Courage Under Fire for which he earned a 1997Blockbuster Entertainment Award Favorite supporting Actor-Adventure/Drama and 1997 Lone Star Film and Television Award for Best Supporting Actor.

Lou was also seen in many TV series like Resurrection Blvd, The Twilight Zone, Psych, The Triangle and Storyline Online. Lou has acted as a character, Agent Ian Edgerton in the TV series, Numbers and character Henry Standing Bear in series Longmire. Lou has also voice as character Forge in the Video game, X Men Legends. In 2012, Lou won Rachael vs. Guy: Celebrity Cook-off. In December 2012, Lou was featured in Imagine Dragons’ music video for Radioactive.

Lou Phillips has been an active speaker for the Filipino Veterans Equity Act 2006, which demands to provide equal benefits to Filipino World War 2 Veterans as provided to the US Veterans. In 1990, although being a Cherokee by blood, Lou was adopted by the Sioux tribe and was given the name “ Star Keeper”. In 1993, Lou received the Oxfam America award for his dedication towards ending World Hunger.

In the year 2008, Diamond landed a major role in the movie Che.  She has been providing her the voice of actor Victor Delgado in the TV series Elena of Avalor along with Aimee Carrero, Jenna Ortega, Chris Parnell, Yvette Nicole Brown, and Carlos Alazraqui.

Lou Diamond has a net worth of around $6 million, as per celebrity net worth, in 2019.

Lou Diamond Phillips has had a long dating history. Lou married his first wife, film director, Julie Cypher on 17th September 1986 but later the couple divorced on 5th August 1990. Then in the same year, Lou was seen hanging out with the actress, Ginger Lynn but in no time they separated. After that Lou was engaged to girlfriend, Jennifer Tilly. The couple met on the sets of Shadow of the Wolf. The couple separated shortly after the engagement. In 1994, after an affair, Lou married Penthouse model, Kelly Phillips with whom he had three children; Lili Jordan born on September 1999, and twins Grace Moorea and Isabella Patricia born on 5th October 1997. After a decade, the couple separated in 2004. The couple divorced on 30 July 2007. In the year 2004, Lou made it public that he was dating painter and make-up artist Yvonne Maria Boismier. The couple engaged in 2006 then shockingly on August 11, 2006, Lou was arrested for domestic violence at his Los Angeles home after a dispute with live-in girlfriend Yvonne and later in December, Lou pleaded no contest to a misdemeanor count of domestic battery and was sentenced three years of probation.

The couple later married on 16th August 2007. Lou told the media that he calls Yvonne his muse and touchstone. The couple has a child named Indigo Sanara born on 9th October 2007. Soon, Lou will be seen as character Luis Urzua in the drama; The 33 and as character Mike in Tao of Surfing. Lou Diamond Phillips is also famous in various sites including a wiki.