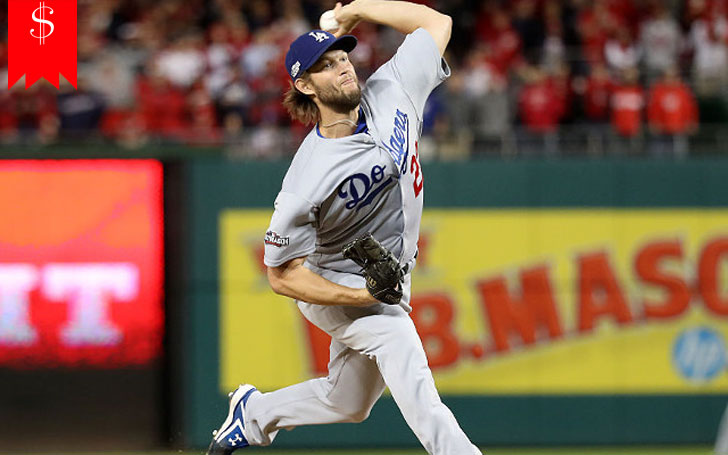 Clayton Kershaw, the American professional baseball pitcher for the Los Angeles Dodgers of MLB makes quite a lot of money. The left handed starting pitcher played against Giants on 28th July 2017. Clayton is said to be the best pitcher in MLB these days.

On board, we’ll discuss Clayton Kershaw’s net worth, salary, income sources and his life style in detail. How much do you think MVP Award winner, Clayton Kershaw has made till date? How does Clayton Kershaw, one of the highest paid baseball stars, spend his money? We have the answers!

Roberto Clemente award winner, Clayton Kershaw, recently has a net worth of $40 million extended with baseball contracts and endorsements. Clayton’s $31 million salary is the highest in baseball right now and the highest for a pitcher in MLB history. In the year 2016, Clayton's net worth was $25 million.

Like other celebrities, Clayton is also paid with endorsements, he endorses Wilson Sporting goods (glove), Under Armour (shoes), Muscle Milk and Subway. Kershaw also received a bonus of $2.3 million while signed with the Dodgers in 2006. It was the highest draft bonus any Dodgers player had received.

Congrats to Kershaw on getting 2000 strikeouts! It was amazing to be in person to see it! #dodgers #kershgonnakersh #kershaw #itfdb

Clayton, the Triple Crown award winner, signed a seven-year contract with the Dodgers for $215.0 million, counting $18.0 million in signing bonuses in 2016. Kershaw now has an annual average salary of $31.0 million.

Dodgers Pitcher, Clayton Kershaw, has purchased a house in Dallas, Texas. His real estate property is valued at $1.5 million. He currently resides in a 2 story- lavish Studio City House located in California.

In 2012, Clayton and his wife Ellen revisited Zambia and donated $100 for every strikeout in the season. They added more to Kershaw's Challenge calling that season "Strike Out To Serve. Seventy percent of the money raised in 2012, was handed over to Arise Africa with 10 percent each strike going to Peacock Foundation in Los Angeles, Mercy Street in Dallas.

Image: Clayton and Ellen traveled to Zambia in an effort to raise funding.

Clayton didn’t stop supporting the children of Zambia. In fact, he is raising funds to pay for 170 children’s surgeries and new medical equipment for CURE hospital in Lusaka. Clayton was actively involved in charitable programs based in Los Angeles; including Habitat for Humanity.