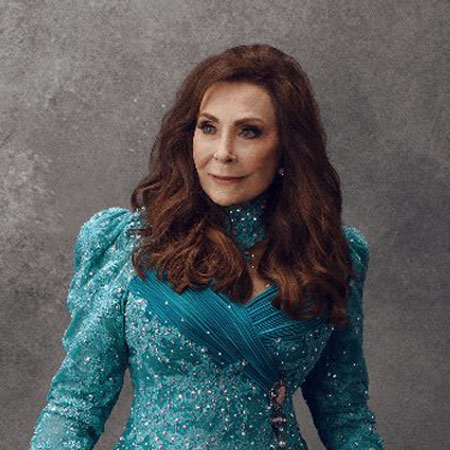 Legendary country music singer and songwriter, Loretta Lynn, is active in the industry for 6 decades, Lynn gave several hit albums and received multiple awards including Grammy. She became one the most awarded female country recording artist and the only female to receive ACM Artist of the Decade.

Lynn was married to her singer husband, Oliver Lynn who died in 1996 at the age of 69. The couple shares six children together. She also has 27 grandchildren and 16 great-grandchildren.

Loretta Lynn was born Loretta Webb on April 14, 1932, in Butcher Hollow, Kentucky under the birth sign Aries. Loretta is an American and belongs to MIxed ethnicity (Scots-Irish and Cherokee descent).

Lynn is the second of eight children born to her parents Melvin Ted Webb and Clara “Clary” Marie. Her parents named her after film star Loretta Young. Her father died in 1959 at the age of 52 due to black lung cancer whereas her mother died in 1981.

Loretta grew up in a mining community near Paintsville with her family as her father professionally was a coal miner, farmer, and storekeeper.

Initially, Loretta Lynn bought a Harmony guitar for $17 and taught herself to play. Within three years, she improved playing. Lynn at first started singing in local clubs and later formed her own band called the Trailblazers with her brother Jay Lee Webb in the band. On February 2, 1960, she signed her first contract with Zero records.

On September 25, 1962, she joined The Grand Ole Opry and was set on becoming a top star. In 1962 her single “Success” made it to the Top 10 followed by many of her other singles.

In 1964, her single “Before I’m Over You” reached No. 4, and “Wine. Women and song” made it to No. 3. In the year 1965, she maintained her solo career with hits like “Happy Birthday”, Blue Kentucky Girl, and “The Home You’re Tearing”. That year her two albums, Songs from My Heart and Blue Kentucky Girl were released.

She began writing songs with a feminist viewpoint after that. From 1967 to 1980 she achieved a breakthrough success. Her album “Don’t Come Home A-Drinkin” in 1967 became No. 1 and one of the first albums by a female country singer to get 500000 copies to be sold.

Her other albums between her breakthrough success tenure were Fist City, Your Squaw Is on the Warpath, and “What Kind of a Girl(Do You Think I am)”. Her singles like “You’ve Just Stepped In”, “Women of the World (Leave My World Alone)’, “Coal Miner’s Daughter” and Rated x continued to be on the charts and top them as well.

Lynn came out with another album called “Love Is the Foundation” in 1973. Loretta became the first American female artist to chart over 50 Top 10 hits in the early ’80s. Her duet with Conway Twitty in 1971 was hit. They became a vocal duo in many years to come. They released an album together called “Dynamic Duo” in 1977.

Loretta recorded an album dedicated to Patsy Cline who was a country singer and her friend who had died in a plane crash in 1963.  The album was called” I Remember Patsy”. In 1980 and 1981 her other two albums Loretta a Looking Good made it to the hit list. One of her last solo releases was “Heart Don’t Do this to me” in 1985.

She made a successful comeback in 2004 with the album Van Lear Rose. She also has published her autobiography “Still Women Enough” and a cookbook called “You’re cooking it Country”

In 2016, Lynn released her 40th studio album, Full Circle featuring Elvis Costello and Willie Nelson. The album also became the 40th album to hit the top ten Billboard's best-selling Country LPS list. The same year, she also released her first Christmas album in 50 years, White Christmas Blue. As of 2018, she is about to release her new album, Wouldn't It Be Great but was delayed because of her health problem.

Loretta Lynn has been nominated for several prestigious awards and won some of them. She has been also honored with several titles and awards. Here is the list of her won awards and honors:

Some of her other nominated awards include the Academy of Country Music Awards, Grammy Awards, and Americana Music Honors And Awards. In 2018, the artist became the Artist of a Lifetime 2018 by CMT.

Loretta Lynn's Net Worth And House

Loretta Lynn has an estimated net worth of $65 million according to Celebrity Net Worth whereas her net worth is estimated to be $60 million as per The Richest. She earns a huge amount of money from her singing career. She also makes an impressive income from her musical performance shows and concerts.

She owns a ranch in Hurricane Mills, Tennessee which features a recording studio, restaurants, western stores, museums, and other attractions due to which it became the 7th Largest Attraction in Tenessee. She owns a house in Hurricane Mills and Mexico.

Loretta Lynn got married at the early age of 15. She tied the knot to Oliver Vanetta Lynn Jr. famously known as Doolittle Lynn who was 21 at the time on January 10, 1948. The couple exchanged the vows only after meeting one month earlier.

After their marriage, they moved to Custer, Washington in an attempt to escape the coal mining industry in their hometown, Butcher Hollow, when she was seven months pregnant with Oliver Vanetta Lynn. The pair shares six children Betty Sue Lynn (1948-2013), Jack Benny Lynn (1949-1984), ErnestRay Lynn (1951), Clara Marie Lynn (1952), and two twin daughters Peggy Jean & Patsy Eileen Lynn. In 2017, she has 27 grandchildren and 16 great-grandchildren.

Loretta’s husband cheated on her and was an alcoholic but she stayed with Oliver till he died on August 22, 1996. They fought frequently and their marriage was shaky to the day of Oliver’s death. About their relationship, she quoted “One of the hardest love stories”. She also explained,

''I married Doo when I wasn't but a child, and he was my life from that day on. But as important as my youth and upbringing was, there's something else that made me stick to Doo. He thought I was something special, more special than anyone else in the world, and never let me forget it. That belief would be hard to shove out the door. Doo was my security, my safety net. And just remember, I'm explainin', not excusin'... Doo was a good man and a hard worker. But he was an alcoholic, and it affected our marriage all the way through.''

Following her divorce, the artist is leading a low-profile life.

Lynn had a stroke in her home in May 2017 and was immediately taken to the hospital. It was the reason behind delaying the release date of her 41st album. On 1st January 2018, she fractured her hip after she fell at her home.

Check out the interview with Loretta Lynn