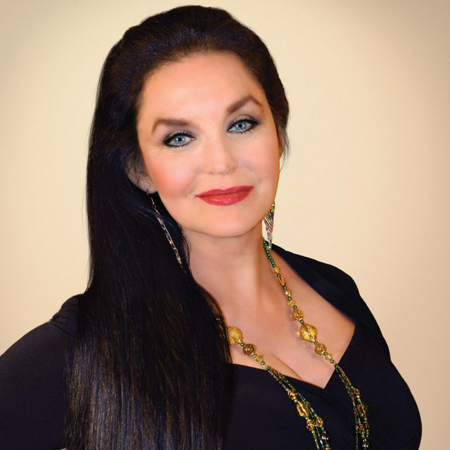 Grammy award winner Crystal Gayle is an American country music legend known for her hit songs, "Talking in Your Sleep" and "Don't It Make My Brown Eyes Blue." She is a member of the Grand Ole Opry and has a star near to her sister Lynn's star in the Hollywood Walk of Fame. In 1983, Gayle listed as one of the 50 most beautiful people in the world by People magazine. She was also named as the Most Promising Female Artist of the Year by Music City News in 1975. She married Bill Gatzimos and together they have two children.

Crystal Gayle was born Brenda Gail Gatzimos on 9th January 1951 in Paintsville, Kentucky, U.S. She is American and belongs to the White-American ethnicity.

#tbt This little girl had big dreams. Thanks to you, they’ve come true. #whenidream #believe

Gayle is the daughter of Melvin "Ted" Webb (1906 – 1959) and Clara Marie Ramey Webb (1912 – 1981). Her mother worked in a nursing home and her father was a coal miner and subsistence farmer, who died of Coalworker' pneumoconiosis.

Gayle was just four when her family moved to Wabash, Indiana. She used to be a shy child but liked to sing. Her mother encouraged to sing for visitors and guests in their house which helped her to get rid of her nervousness.

Inspired by her sister Lynn, she learned to play the guitar and also sang back in her brother's folk band. While in high school, Gayle went on tours with her sister for a few weeks of each summr.e

In 1970, she graduated from Wabash High School. Just after her graduation, Gayle signed with Decca Records, her sister's label but she was asked to change her name as the label already had a singer named Brenda Lee.

Crystal Gayle began her professional career in music with the release of the single, "I've Cried (The Blue Right Out of My Eyes)," in 1970. Loretta Lynn was the lyricist of the song, and it hit #23 on Billboard's country singles chart.

At the time most of her singles were written by Lynn and also the label asked her to sing in a similar style to her sister. However, this approach failed as she did not even reappear in the country's Top 40, despite a regular appearance in The Country Place, Blake Emmon's TV show. In 1974, her single Restless ranked #39 on the Billboard.

Gayle then left Decca Records and signed with United Artists which gave her creative freedom. She launched her first album, Crystal Gayle in 1974. The single "Wrong Road Again" peaked the first top-ten country hit, listing at #6.

Lost a friend today. Sending lots of love and prayers to Dog, her children and family. We will miss you, Beth! @mrsdog4real

She released I’ll Get Over You in 1976, first of her 20 number 1 singles in the country singles chart, listing #71 in the Billboard’s Hot 100 and #40 in the adult contemporary chart.

The following year, Gayle released, "You Never Miss a Real Good Thing (Till He Says Goodbye)" peaked #1 and "I'll Do It All Over Again," peaked #2.

Gayle recalled what her sister Loretta Lynn had said:

"'You record what I couldn't record — you do MOR, middle of the road', "and that was the best advice I could get. I don't think I ever would have made it if I went down the road and did the music my sister did. I would only have been compared to her."

The song helped her album, We Must Believe in Magic to be the first platinum-certified album by any female country artist. Later she toured worldwide including Britain and China; became the first artist to record a performance on the Great Wall of China.

After the success, Gayle and her producer started working on more crossover music(country and pop). Consecutively for two years, she won the Country Music Association Awards for Female Vocalist of the Year in 1977 and 1978 respectively. Similarly, Gayle received the Academy of Country Music three times (1976–1977 and 1979).

Gayle released her follow up single, "Ready for the Times to Get Better," a re-recorded version of the track from her first album Crystal, her fourth #1 country hit but failed to make in Pop Top 40. In 1978, she released an album titled, When I Dream, which consisted 12 songs out of which, "Talking in Your Sleep" and "Why Have You Left the One You Left Me For" ranked #1 at Country hits. Gayle’s last solo Top-20 pop hit was Half the Way from her album, Miss the Mississippi.

She also was seen in the fourth season of The Muppet Show in its second episode. Later, she released several singles which were commercially successful and even helped her to win awards. Some of her hit songs are "It's Like We Never Said Goodbye", "If You Ever Change Your Mind", "'Til I Gain Control Again", "Our Love Is on the Faultline",  "Baby, What About You", "The Sound of Goodbye" and "Turning Away" among others.

Gayle along with Gary Morris sang the theme song for TV soap opera Another World. They even performed the song at the Daytime Emmy Awards which became the show's theme until March 1996.

She also sang the theme song for the 1983 TV series, Masquerade. In the 1990s she released two studio albums Ain't Gonna Worry (1990) and Three Good Reasons (1992) but unfortunately both the albums failed to chart.

In the early years of the new millennium, Gayle co-wrote and recorded, Midnight in the Desert for late-night radio host Art Bell. Bell made it the closing song for his programs Coast To Coast AM and Art Bell's Dark Matter. In 2007, she was awarded "Best Female Entertainer" by the Second Annual American Entertainment Magazine Reader's Choice Awards.

After a year, Gayle was introduced to the Kentucky Music Hall of Fame. During the ceremony in Hollywood, California, she received a star on the Hollywood Walk of the Fame. She continues to perform at the national and international tours. In 2016, it was announced, she would receive Academy of Country Music Award.

Gayle was asked to become a member of the Grand Ole Opry by Carrie Underwood after 50 years of her debut as a guest artist on November 15, 2016. Currently, she is working on her new album which will be covers of country music classics and will be produced by her son. However, the released date hasn’t been fixed yet.

Crystal Gayle is an American country music performer who has a net worth of $10 million. She has won many Grammy Awards.

Out of the 40 Greatest Women in the Country History, Gayle has been ranked 32. The most successful song in her entire career was the song, “Don’t It Make My Brown Eyes Blue.”

So far, she has released 24 studio albums, 17 compilation albums, and 1 live album. In the 1970s and 1980s, she had twenty #1 country songs. Six of her albums were certified gold, and she is the first female artist to reach platinum sales in country music history.

Crystal Gayle married Bill Gatzimos on June 3, 1971, and have been together ever since. The couple together has two children, Catherine Clare Gatzimos and Christos James Gatzimos.

Her husband is the President of Gayle Enterprises, Inc. Previously, he worked in Crystal's for Fine Gifts & Jewelry, Inc for twenty-three years before leaving in 2009.

In January 2007, American habitual car thief, Christopher Daniel Gay stole Gayle's tour bus while he was trying to escape from the custody and made his way to Tennessee.

Gay drove the bus from Tennessee to Florida and parked the car near the NASCAR Cup Series driver Jeff Gordon. The next day, he was arrested, and the bus was returned to Gayle.