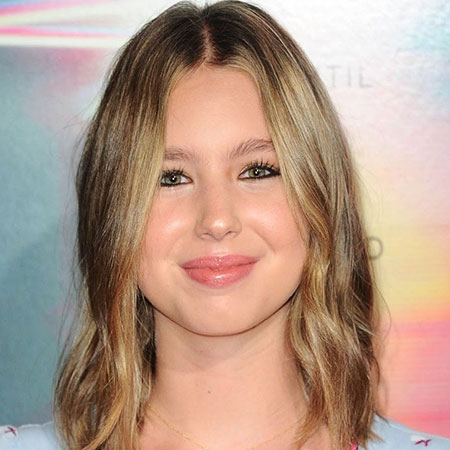 Born and raised in the United States, Lilia Buckingham is an American dancer, actor, and model. She is a competitive dancer who is currently associated with MNR Dance Factory. She became a part of the reality show 'Dance Moms' through her mother. Besides dancing, she has also made her appearance on several TV shows and movie.

Lilia Buckingham was born on April 9, 2003, in the United States under the zodiac sign of Aries. People who are born under this zodiac sign show the personality like confident, enthusiastic, optimistic and honest.

Lilia was born to father Marcus Buckingham, a British-born author, motivational speaker, and business consultant. Lilia's mother's name is Jane Buckingham who is also an author and has published many books. Lilia has an older bother Jake Buckingham.

In mid-2010, her mother Jane was introduced to several performers form Lifetime's popular dance reality show Dance Moms. While Jane was there, she introduced her daughter to the children of Dance Moms knowing they were as passionate as Lilia was.

my favorite photo from 2018 bc ghost just looks so strange. but really, this year i met so many wonderful new people, got to work on so many fun projects, and discovered so many important things about myself. 2019, come at me baby

After her mother introduced her to the children, they took pictures with her and posted on their social media. Lilia started getting attention on social media following the post and within weeks, she became one of the famous star kids.

Besides dancing, she has appeared in many shows such as Modern Family (2012), Goof morning America (2013) and Day & Night (2016). She also played a role in movies like Total Eclipse (2018) and Dirt (2018). Lilia even works as a model and as a model, she has worked for some famous brands like Dancer Keeper, Max & Bean, Malibu Sugar, and ModAngel.

While many of Lilia's fans are wondering if she has a YouTube channel, we can confirm that she indeed has a channel. She first joined the YouTube on March 14, 2013, with the self-titled channel. On the starting days, she rarely uploaded videos on her channel, however, she later started to upload videos in a frequent manner and she also started gaining several subscribers. As of 2019, she has about 52k subscribers with a total view of 733,056.

The below-shown video is the latest video of Lilia Buckingham where she gives the answers to the questions from her fans.

Lilia Buckingham is just 15 years, however, she is already an established dancer and reality television star. She hasn't revealed her exact income and net worth as of January 2019, however, looking at her growing popularity and work efficiency, we can estimate that she might have the net worth in thousands of dollars.

As per Payscale, the average salary of a dancer is about $34,431 per year so, we believe she also gets the salary in the same range. She further enhances her wealth from her YouTube channel. Besides, she was also the part of the dance reality show Dance Moms.

Lilia has also played her roles in some movie that helped her increase her fortune. An average child actor receives about $52,000 per year according to the sources. Besides, she has even done modeling for famous brands like Dancers Keeper, Max & Bean, Malibu Sugar, and ModAngel which are some of the sources of her income.

Lilia Buckingham is currently single. She is busy building her career as a model, dancer, and actor. Before going to single status, Lilia was in a relationship with a child actor Jaeden Lieberher. On January 4, 2018, their relationship caught the media attention after Lilia posted a picture of Jaden to wish him on his birthday.

Their relationship was confirmed when she posted a photo on her Twitter on the valentine's day with a caption "Got to love with this cute one." They were having a smooth relationship till June 2018, however, they broke up in mid-2018 due to some unrevealed problems. Lilia deleted pictures of Jaeden form her social media which sparked their split rumor. She finally announced their separation on June 10, 2018.

hi everybody! this is outfit has a tennis coach vibe and i like it!

Lilia explained why they broke up saying "Jaeden is very talented and is busy with his ongoing projects. We decided to take a step back to concentrate on ore respective career and I still love Jaeden." Apart from that, she is not known to have any other boyfriends. However, Lilia is close friends with Maddie Ziegler and Mackenzie Ziegler.

On November 7, 2018, she went through surgery to remove her tumor. After her successful surgery, Buckingham took to her Instagram to share a photo revealing the tumor was gone after the surgery.