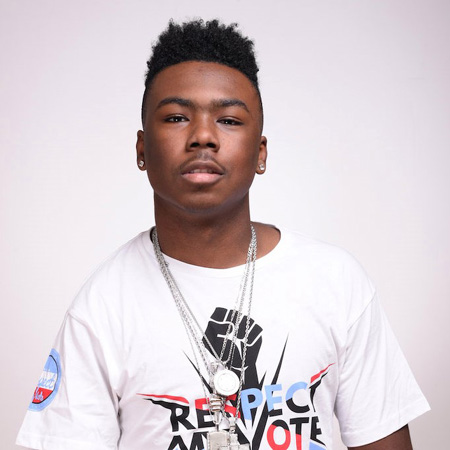 The teen hip hop artist, Lil Key is a Baltimore-based rapper who gained an enormous popularity with his first album ‘My Life Volume 1.’ Besides, he also featured in The Rap Game’s second season. Key is highly appreciated for having ‘the mind of a leader and the heart of a lion.’

Lil Key was born in Baltimore, Maryland, United States of American, on April 5, 2000.  He had a brachial plexus injury when he was born. Regarding his nationality, Lil is an American, and as far as his ethnicity is concerned, Lil is a Black American.

The rapper, Lil, spent most of his childhood days in his hometown, Baltimore along with his parents and completed high school level from there.

Lil often developed unique rhythms during his school days. Lil has natural talent as he has performed at the school in random performances as well as attracted the crowd. His talent was realized by his family and friends. He was keenly interested in music from his early age as he began uploading his songs on YouTube at the age of 12.

Lil is a hip-hop artist from Baltimore. He is one of the seven young rappers in the industry. He made his rapping debut in a church talent show when he was 15 years old. He launched his first album by the title, My Life Volume 1 and released the album’s debut song "Backpack Flow."

Lil performs at more than 100 community events per year. Some of them are The Speak Life Tour, Empowering Minds of MD’s Youth, The Youth Bmore Summer Block Party and many others.

The hip hop artist, Lil Key, 17, is unmarried. Undoubtedly, he has earned a million of fans at the very young age. However, Lil has never spoken about his dating and affairs. He has kept his love life entirely out of the media eyes.

The rapper is also pretty active on social media sites. According to Instagram posts, Lil is dating a girl though he has not disclosed anything about her. He is also worked for several non-profit charity projects to help children suffering from injuries and disabilities.

Lil Key has earned a good amount of money as he has released some hit songs and featured in TV series. Lil is believed to have made a net worth of $1 million.