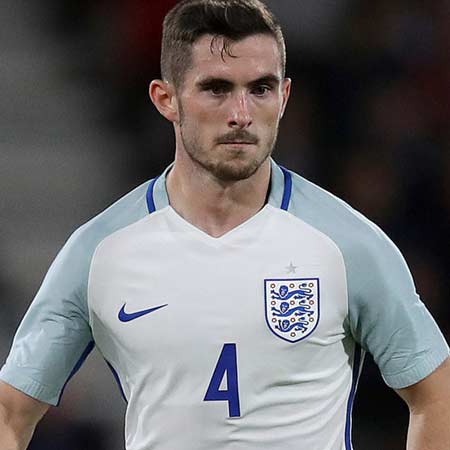 Lewis Cook, just at 21 has earned a number of prestigious accolades and gained huge fame with his unquestionable brilliance on the pitch. The English midfielder shows a great defensive skill, a range of passing, and technical ability with his feet which won him a number of titles and awards including Championship Apprentice of the Year award and Young Player of the Year for the 2015–16 season representing Leeds United. He has won the UEFA European Under-17 Championship in 2014 and led the English team to lift the trophy at the 2017 FIFA U-20 World Cup as a captain. He was named one among the five standby players in the 23-man squad of England for the World Cup 2018.

Born Lewis John Cook in York, England, on 3 February 1997, Cook was raised in North Yorkshire. Cook attended the Tadcaster Grammar School, where he was a part of the school's U-13 and U-15 team.

Cook later enrolled at the Leeds United Academy and completed his graduation. Representing the college, he won several youth competitions there and joined the college's Under-18 team at only 15. Cook scored his first goal for the United in a 3-1 loss against Liverpool Under-18 in FA Youth Cup on 1st March 2013.

Cook entered the senior club of Leeds United during the 2014-15 pre-season and made his professional debut for the United in the first match of the season as a 64th-minute substitute against Millwall. He made his space in the starting eleven of the club in the League Cup match against Accrington Stanley on 12 August 2014. Playing with England's national team, Cook had an ankle injury which ruled him out of the final few matches of the season, still, he managed to claim the Championship Apprentice of the Year.

The Yorkshire Evening Post named Cook the runner-up to winner Alex Mowatt in its Player of the Year for the 2014-15 season. He also won the  Leeds' Young Player of the Year Award in the same year.  On 11 May 2015, Cook extended his contract with Leeds until June 2017.

The footballer netted his first goal against Doncaster Rovers, in the League Cup, on 12 August 2015, however, he was set off for a straight red card in the first half following which he received a three-match suspension. He was a recipient of the Football League Young Player of the Year Award in 2016.

Cook put his step in Premier League with AFC Bournemouth signing a four-year contract with the club on 8 July 2016. He made his Premier League debut at home in the 3-1 loss to Manchester United in Bournemouth's first match of the season. After two more appearances in the League Cup, he picked a serious ankle injury which sidelined him until 2017. He made his come back to the team as a substitute in the 56th minute in a 4-0 loss to Tottenham Hotspur on 15 April 2017.

Lewis Cook played a vital role in the age-levels for England and was one of the key players in the victory of 2014 UEFA European Under-17 Championship. Cook was selected as a captain for the FIFA U-20 World Cup in 2017 and led the team to the trophy. Cook played a total 6 of 7 England matches at the tournament including the 1-0 win over Venezuela in the final. Cook scored his first international goal in a 1-1 draw against Guinea.

In November 2017, Lewis Cook received a call from the senior team in a friendly match against Brazil, in November 2017; however, he couldn't enter the pitch at that time. He was again called up for the international friendlies against the Netherlands and Italy in March 2018 and made his international debut against the latter as a 71st-minute substitute, on 27 March 2018.

Lewis Cook's Net Worth And Salary

Lewis Cook has collected a lot of money from his already flourishing career. According to the recent statistical report, his net worth is believed to be more than €4 Million (4,675,108 USDollar).

The Bournemouth midfielder Lewis Cook is not married yet but has been in a longterm relationship with his girlfriend Loretta Bennett. According to his social media, the couple started dating in 2012 as Cook posted a photo along with Bennett on 28 June 2017 and captioned it

"5 Years with my beautiful girlfriend"

5 years with my beautiful girlfriend!

The duo is still going strong on their way with no rumors of a break-up.

Besides they also have a dog named Milo.