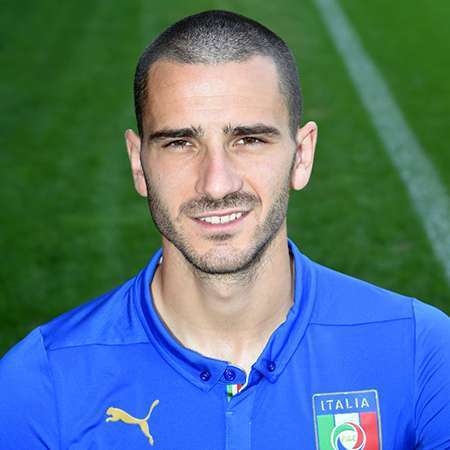 An Italian Professional footballer Leonardo Bonucci is a Defender in the world Football arena. As of 2018, he plays as a center-back for the Italy national team and Serie A club Juventus. He was born in the year 1987 May 1 at Viterbo, Italy. Dorita Bonucci and Claudio Bonucci is the name of his Parents. His father owns a paint shop in Viterbo. He has a sibling names Riccardo Bonucci who is also a footballer. He has the height of 190 cm and body weight od 82 Kg. Leonardo Bonucci is of 31 years of age.

He is a married man. Martina Maccari, a former model, is the name of his spouse. She was his longtime girlfriend. They got married in the year 2011. This beautiful couple has a child, adorable son, Lorenzo, born in 2012. He is a brave man as well. He was accosted by a mugger but as a brave man he faced the mugger and even tried to block the escape of mugger.

Leonardo Bonucci plays in the current Team of Italian Club Juventus F.C from the squad NO.19. He is also in the team of Italian National Football Team. He is a talented Defender in the team. According to the Salary Statistic record of Leonardo Bonucci, it is reported to be 1.7 million Euro in 2012. There no information available on his market value or his agent.

Leonardo Bonucci is known for his skilled and quality passing range. He is applauded for the attack generated from his long passes.  It is the style of his play. He likes to play off the ground. He is good at dribbling the ball with good control over the ball and has a balance in the game. He is good at tackling but he does not dive to tackle the ball. Leonardo Bonucci is a young and talented athlete.  He is energetic and enthusiastic. He is ambitious and eager to learn and grow. He has got the strength and stamina for the game giving him catch up the pace of the game (speed) and durable in the match. As of 2018, his net worth is 35,00 Mill. €. His highest market value was 45,00 Mill. € on Jun 8, 2017.

Leonardo Bonucci started his youth career at the native club Viterbese in 2004. Spending a season in this club, he joined with Internazionale. Spending two seasons in the youth team of Internazionale, Leonardo Bonucci finally played in a match from the club which initiated his senior career steps. In the year 2007, he joined with Treviso. He spent 2 seasons at Treviso appearing in 40 matches with two goals. In 2009, Treviso sent him on loan to Pisa where he appeared in 18 matches with a goal score. After his release from Treviso, he was transferred to Genoa which again transferred him to Bari. He remained in the team for a season. In 2010, Leonardo Bonucci joined Juventus on a four-year contract. Leonardo Bonucci has played 35 cap matches bagging 2 goal scores from Italian National Football Team. He is playing for his Nation Italy from the team since 2010.