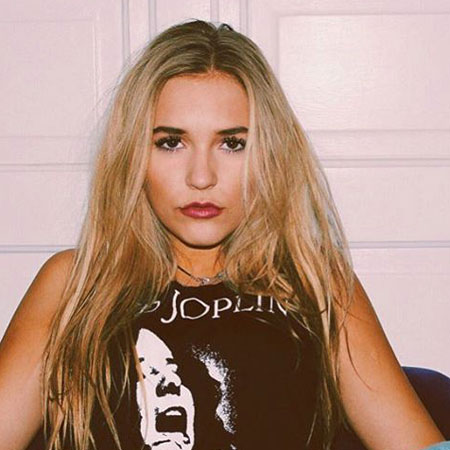 Lennon Stella is a famous Canadian singer and actress who is well recognized for her role as Maddie Conard in the ABC musical drama TV series, Nashville. She made her TV debut from the series in 2012 along with her younger sister, Maisy. In the first season of Nashville, they performed The Lumineers' 'Ho Hey' and their version of the song hit #40 on the Billboard Hot Country Songs Chart.

Stella along with her sister also created a YouTube channel where they upload several cover songs videos. Their cover of Robyn’s 'Call Your Girlfriend' went viral overnight.

Besides, they were also featured in several popular magazines like People, The Huggington Post, Glamour, and The Oprah Magazine among others.

Lennon Stella was born on 13th August 1999 in Oshawa, Canada under the birth sign Leo. Stella is Canadian as per nationality and ethnicity wise, she is White. She is the daughter of Marylynne Stella and Brad Stella. Both of her parents are involved in the music business.

Her parents named her after John Lennon, legendary Beatles singer. She also has a younger sister, Maisy.

From the early age of five, she started singing and learned to play piano, guitar, and ukulele. She never received professional vocal or instrumental training.

Lennon Stella, initially, started writing songs with her sister and played at various shows and festivals. When her sister was auditioning for the show, Nashville, the casting agents discovered Stella and decided to cast both of them in the show.

In October 2012 she along with her sister starred in the ABC musical drama TV series, Nashville. They appeared in the TV series with Hayden Panettiere, Charles Esten, Connie Britton and Clare Bowen. In the first season of the show, the sisters performed The Lumineers' 'Ho Hey' and their version hit #40 on the Billboard Hot Country Songs Chart. Their performance in the TV series helped them to grab huge fan following.

The same year, they released an EP, Live YouTube Sessions and also released a Christmas single, Christmas Coming Home. In 2014, they recorded a song, Love for the Coop Naturaplan TV commercial which hit #1 on the Swiss iTunes chart. Later, they performed in several concerts and musical shows.

Before appearing in the TV series, the two sisters did several works for their publicity. They uploaded several cover songs on their YouTube channel, ''lennonandmaisy''. Among them, the cover of Robyn’s 'Call Your Girlfriend' went viral overnight. Their YouTube channel earned millions of views and over 760k subscribers.

CAPTION: Lennon and Maisy in a concert. SOURCE: Instagram

After the cover went viral, they were invited to perform the cover on Good Morning America in New York.

Besides, their popularity helped them to get featured in several magazines like People, Glamour, O, The Oprah Magazine and The Huffington Post among others.

Lennon Stella has an estimated net worth not less than a million dollar, however, the amount is still under review. Stella earns $107-$1.7k monthly and $1.3k-$20.5k yearly from her YouTube channel, ''lennonandmaisy''. She is also earning a good amount from doing concerts and musical shows.

As per some online sources, the average salary of the Nashville cast members is $23,251.

Lennon Stella, the beautiful cover singer, focused on her career. Her busy schedule spares little time to do anything else so it can be assumed that she is possibly single at the moment.

She is close to her friend, Kayla Wagner.

Stella has inked, ‘’come together’’ in her right hand.

Here is the video where Lennon and Maisy Stella talk about their role in the TV series, Nashville: