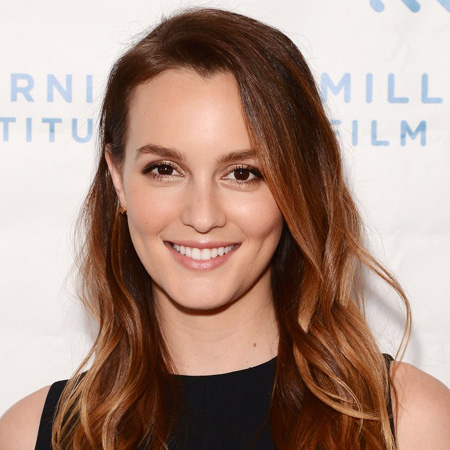 Leighton Marissa Meester is an American singer, actress, songwriter, and model, well known for her role as Blair Waldorf on the television series, Gossip Girl.

Leighton Meester was born on 9th April 1986 in Fort Worth, Texas, U.S.A. Leighton was born to Constance Lynn and Douglas Jay Meester. Most of her early days, she spent in New York City and Los Angeles.

Leighton's ancestry includes German, Irish, Scottish, Dutch, and Welsh. So she has a mixed ethnicity and holds an American nationality. Meester's father is a real estate broker, and her mother is a writer.

During the time of her birth, Meester's mom was serving time in a federal prison for her involvement in a drug dealing that supplied marijuana from Jamaica to the United States of America.

Meester also booked commercials for Tamagotchi and Clearasil and modeled for Limited Too alongside Seyfried.

Leighton made her television acting debut as a murder victim's friend on an episode of Law & Order. At her age of fourteen, she moved to Los Angeles, searching for more stable work, and studied at Hollywood High School and Beverly High School.

In 1999, after her television debut playing as Alyssa Turner in an episode of Law & Order, Leighton made her appearance as a guest in two more series before landing a prominent role in the film Hangman's Curse, based on the best-selling book by Frank Peretti.

Later in 2007, Meester was cast in the CW's teen drama series, Gossip Girl as Blair Waldorf. The series is based on the book series of the same name by Cecily von Ziegesar.

In 2011, Leighton portrayed as Rebecca Evans, an obsessive, bipolar woman, in the thriller film, The Roommate. Though the movie received negative reviews mostly, Meester's portrayal was praised by critics.

The following year, she appeared in the comedy film, That's My Boy, alongside Adam Sandler, Milo Ventimiglia, and Andy Samberg. This movie too received negative reviews. The movie was also nominated at Raspberry Awards.

In the year 2007, Leighton Meester recorded the song 'Inside The Black,' one of the soundtracks of Drive-Thru. The following year, she sang with Tony Benett in an episode of Entourage.

In April 2009, Meester released the song 'Birthday,' featuring the Awesome New Republic. Later that month, she signed a recording contract with the Universal Republic. The same year in July, her song 'Body Control' surfaced the internet.

Leighton's first official single, 'Somebody to Love,' featuring R&B singer, Robin Thicke was released for airplay on 13 October 2009, which was available for digital download on 14 October 2009.

In October 2010, Leighton announced that she had been working with a band 'Check in the Dark' and had been writing for the last six months after being inspired by Country Strong.

In November 2013, Leighton engaged to an actor, Adam Brody. They both met while filming, The Oranges, in March 2010. Later, the couple got married in a private ceremony on 15 Feb 2014.

Leighton Meester earns an enormous amount of money from her various successful career as an actress, singer, model, and songwriter. She has made her appearance in different movies and released many popular songs.

Leighton also earns from endorsements deals with many brands which add up to her total net worth that is estimated to be $ 5 million.