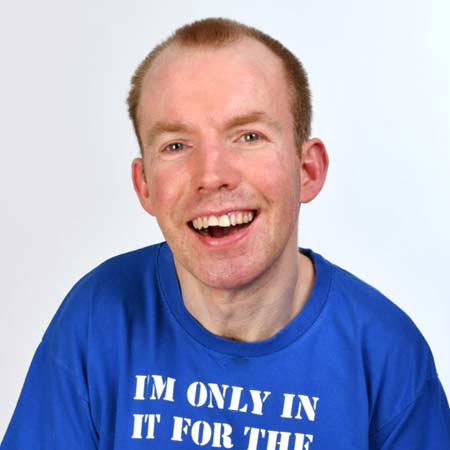 Lee Ridley aka Lost Voice Guy is one of the inspirational comedians of the generation. He was six months old when he suffered from cerebral palsy and lost his voice forever. He rose to fame after winning the 12th series of Britain’s Got Talent 2018. Ridley used pre-recorded sentences on his computer for his stand-up acts.

Lee Ridley aka Lost Voice Guy was born on 31st December 1980 in Consett, County Durham under the birth sign Capricorn. He was diagnosed with a neurological form of cerebral palsy and was in a coma for about two months.  As a result, he was unable to speak.

Happy Christmas to you all!

The disability created difficulty in communicating with people until the age of 8 when he received his first communicating device. In 2002, he graduated with a master degree in journalism from the University of Central Lancashire. The BBC News Sponsorship Scheme sponsored his Master’s degree.

In 2006, Ridley started working with the BBC and local newspapers. The following year, he worked as an online content manager for the city of Sunderland.

Lee Ridley started his career in comedy in 2012, however, he got into full-time comedy in May 2015 after the short meeting with popular comedian Ross Noble. Ridley told that he could do a better Stephen Hawking impression than that of the seasoned funnyman.

Later, he purchased an iPad voice synthesizer app named, Speak It! which delivers the words through the voice synthesizer. Following his first show, he got a hood audiences reactions and adopted a style of improvisation. His first successful show was 2013's Edinburgh Fringe Festival but the performance was cut short after he suffered from pneumonia.

In 2018, Ridley worked on Radio 4 sitcom Ability as a disabled Matt which he co-wrote with comedian Katherine Jakeways.

On 21st April 2018, Lee Ridley appeared on 12th series of Britain's Got Talent. Here is the video of his audition:

‘’ I didn't know what to expect really. A comedian has never won Britain's Got Talent so I wasn't sure how well my act would go down with the audience. 'I was surprised to get to the final and I never expected to win so it turned out perfectly.’’

‘’I’ve been overwhelmed by the support I have received - in fact that's the best part of this whole experience. Everyone has shown so much love since my first audition and I’m very grateful to it.’’

After winning the show, he revealed that he will be buying a Geordie accent for his iPad. He told,

‘’ I'm definitely going to get a Geordie accent for my iPad (with the prize money) because I'm sick of sounding like a posh version of RoboCop.’’

As of June 2018, he is advertising for an assistant on Gumtree as will be appearing on the show, The Royal Variety Performance.

Ridley's net worth is estimated to be in millions, however, the amount is not disclosed yet and still under review. His major source of income is his career as a comedian. He received a cash prize of £250,000 ($294537) after winning the 12th series of Britain's Got Talent in 2018.

Lee Ridley is the member of Smile for Life charity where he played the prominent role to inspire disabled children. In 2015-16, he performed at the charity event for Smile For A Night Variety Show at Opera House and Tyne Theater.

The fan favorite comedian, Lee Ridley is yet to be married. He is ambitious and hardworking which might be the main reason for giving more priority to his career rather than involving in some serious relationship.

As of 2018, he is single. He, however, posted a picture with a mysterious lady on his official Instagram account whose identity has not been made public yet.

Me and my invisible one

He created his own website, lostvoiceguy.com where he posts several comedy videos of him.