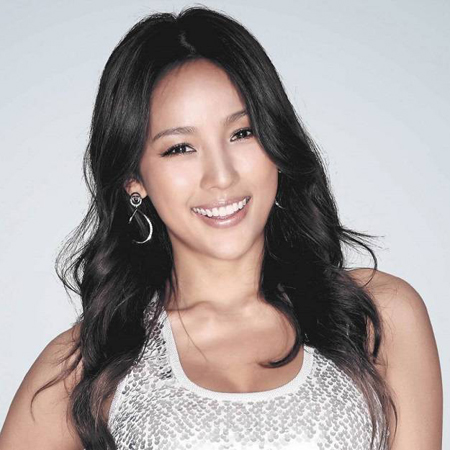 South Korean singer, Lee Hyori is known for her popular songs like ‘Hey Girl,’ ‘Hey Mr. Big,’ ‘Chitty Chitty Bang Bang,’ ‘Shall We Dance,’ ‘Amor Mio,’ and ‘Going Crazy,’ among others. She is an actress, television presenter, as well as an activist. Hyori debuted her singing career as a member of the K-Pop Girls group ‘Fin.K.L.’ She also worked for the Mnet Media & B2M Entertainment and DSP Entertainment. She won Artist of the Year awards for her debut solo album, Stylish in 2003. She is married to musician Lee Sang-soon, guitarist of the rock band "Roller Coaster."

Lee Hyori was born on 10th May 1979 in Cheongwon, Chungcheongbuk-do, South Korea. She is Korean by nationality and belongs to South-Asian ethnicity. She is the youngest daughter born to Lee Jung-gwang and Jeon Ji-sun.

Hyori has two sisters, Lee Aeri and Lee Yuri and a brother, Lee Gook-jin. As a child, she always wanted to become a police officer but, later developed her skill in acting and singing.

Lee Hyori began her singing career in 1998. She became a member of South Korean pop girl group Fin.K.L. The group debuted their first single, ‘Blue Rain’ on May 12, 1998.

Fin.K.L released their second single, ‘To My Boyfriend’ following the first release. The song became their multiple #1 hits at the time. The group became the most popular and successful pop groups of all time in South Korea giving a tough competition to fellow popular girl group S.E.S.

In August of 2003, Hyori debuted her first solo album ‘Stylish.’ The album became very popular and earned her many accolades. The lead single ‘10 Minutes’ from the album became one of her signature songs.

According to the Music Industry Association of Korea, the album (Stylish) made the total sales of 144,182 copies in South Korea. She rose to popularity after the success of her solo album. The Korean Media nicknamed her 2003 "The Year of Hyori" and was dubbed as the "Hyori Syndrome" in South Korea, judging her activities.

Hyori debuted in acting in January 2005. She starred in the SBS television series, ‘Three Leaf Clover.’ However, the 16th episode drama series received low ratings and she was criticized for her acting.

Hyori released her follow-up album, Dark Angel in February 2006. The first single, Get Ya! from the album was accused of being plagiarized by the songwriters of Britney Spears' song Do Somethin'.

The following year, Hyori singed three-year contract worth ?2.2 billion (approx. US$2.2 million) with Mnet Entertainment (Mnet Media now). The contract made her the highest paid female singer in South Korea.

In 2007, Hyori starred opposite Lee Dong-gun in the mini-drama, If Love...Like Them. She announced that her new digital single would be the soundtrack to the drama.

Hyori performed three tracks in the South Korean music program, Inkigayo on February 25, 2007. She sang Toc Toc Toc as the lead song in the program. The single was given a digital-only release and was given a limited release of 30,000 copies only.

The three tracks were released on March 6, 2007. It also included the reworked version of Toc Toc Toc. The album was the best-selling album selling 27,845 copies.

Though her single was a huge success, her drama was highly penalized for violating advertisement guidelines. The drama also had several instances of overt product placement, in addition to using Lee's songs in the soundtrack.

Hyori has also co-hosted a number of television programs such as ‘Happy Together,’ ‘Sang Sang Plus’, ‘Change’, and ‘Time Machine’. She launched her third studio album ‘It’s Hyorish’ in 2008.

Hyori’s contract with Mnet Media expired in November 2009. She didn’t renew her contract, as she wanted to work with Gil Entertainment (currently B2M Entertainment).

However, Hyori released her fourth album ‘H – Logic’ under the label, Mnet Media in 2010. Her album, H-Logic consisted of seven songs and was composed by Bahnus. However, the album didn't work as expected instead faced plagiarism issues.

Hyori admitted that the plagiarism accusations against her were true on June 21, 2010. She also stated that she had been 'deceived' and has temporarily stopped all her singing activities and also suspended her television appearances.

Hyori’s fifth studio album, Monochrome, was released on 21st May 2013, and it was her last album with B2M Entertainment.

In February 2015, Hyori decided to take a break from the industry. She stopped working on television shows and closed her blog and social media as well. In October, Lee's representative told media that she would be taking a 2-year break from the entertainment career.

Hyori returned to her singing career in November 2016 with an a s sociation with Kiwi Media Group. She again returns to social media in 2017, December.

In January 2017, Kwi Media's CEO Kim Hyung Suk announced on MBC's Video Star that Hyori was working as an executive producer on her new album together with him and songwriter Kim Dong Hyun.

On 4th July 2017, Hyori’s fourth album ‘Black’ was released along with the rustic-themed official music video for the title track. She has written eight and composed nine out of the ten songs and is an executive producer for Black.

Hyori has also appeared in TV shows like ‘Take Care of My Dad’, ‘Korea’s Next Top Model’, ‘The Generation of Sensibility’, and many others. She also featured in movies including ‘Emergency Act 19’, ‘Dancing Queen’, and ‘Duke’.

Hyori’s first single from her third album ‘U Go Girl’ ranked #1 in the offline and online lists. She also won the Mutizen song Award for her lead single ‘Chitty Chitty Bang Bang.’

Among the sixteen songs of her 5th studio album Monochrome, eight topped the Top 10 list of Bugs, Naver Music, and Olley. She has won the SBS, Golden Disk, Seoul and KBS Music Awards.

In 2013, Hyori was awarded KMTV Music Award for the ’Best Artist of the Year’. She was also honored with the Mnet Asian Music Award for several categories in years 2003, 2008 and 2013.

Hyori is married but has no children. She tied the knot to Korean guitarist, Lee Sang Soon on September 1, 2013. The ceremony was held at their vacation home on Mt. Halla in Jeju Island.

The pair started dating, as both were the members of an animal rights group. They began dating after they collaborated in July 2011 for a song which Hyori recorded supporting animal shelters.

The couple together appeared in a South Korean television program, Hyori's Home Stay. In an interview with MBC Radio star, Lee Hyori shared about her marriage and cheating on her husband. She said,

"I used to have a new boyfriend every 2 years so I wondered if a marriage is possible when I had about 50 years left in my life. I was scared. I thought, 'What if I get criticized by the nation?"

When she was asked about her husband reaction, she replied,

"My husband also says 'I'm worried about it,'"

"My boyfriends in the past were the ones who provided me encouragement. I tend to change my mind easily and have up and downs. You need to have a break in between after meeting someone but I just... (switched to another)."

"My past boyfriends appear in my dreams. I must feel sorry for them because I dream about talking things through with them."

Besides, Hyori favorite song genre is R&B and ballads and color id white. She was also part of a Korean cosmetics commercial with Jessica Alba.

The South Korean star is active in charity works as well. She is one of the leading socialtainers who has raised her voice for social causes. She is an advocate for animal welfare and animal rights.

Hyori encouraged her fans to vote through a series of tweets and re-tweets during the presidential elections in 2012. She was listed as one of "the socialtainers that best represents Korea" by Panel now in June 2012.

Lee Hyori's Net Worth And Salary

Lee Hyori was one of the highest paid female singers in South Korea, earning approx. US$2.2 million in 2006. She has the net worth of $18 million. She has earned a huge amount of money from her career. Her earning according to the year are listed below: