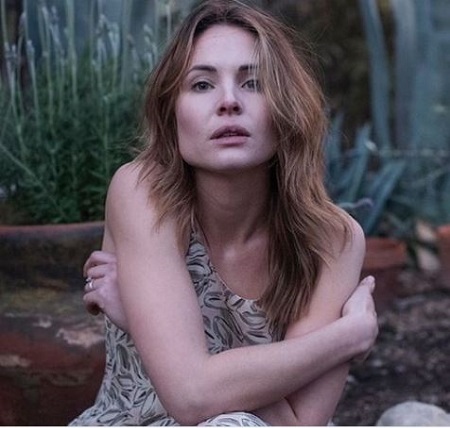 Teen Choice Award-nominated American actor, Leah Pipes is well known for her role, Camille O’Connell (a human therapist) in The CW’s TV series, The Originals. She is also notable for starring in the slasher movie Sorority Row, and TV series Life Is Wild.

Leah Pipes was born on 12th August 1988 in Los Angeles, California as Leah Marie Pipes under the birth sign Leo and was raised in Southern California.

The 32-year-old actress made her Hollywood debut in 2001 as Stephanie in the Angel, a spin-off of the TV series Buffy the Vampire Slayer. Two years later, she appeared as the main role, Sarah Davis in ABC’s sitcom, Lost at Home starring Mitch Rouse, Connie Britton, and Gregory Hines.

From 2004-2005, Pipes appeared in a recurring role in the TV series, Clubhouse with Jeremy Sumpter, Dean Cain, and Christopher Lloyd. From 2007-2008, she was associated with the series; Life Is Wild appearing in 12 episodes. She shared the screen with George Faber and Charlie Pattinson.

Some of her other works include Odd Girl Out, Ghost Whisper, Law & Order: LA, and The Defenders among others. As of 2018, Pipes is working as a human therapist, Camille O’Connell in The CW’s series, The Originals.

The number of audiences highly appreciated her performance in the series. Her work also helped her to get nominated for Teen Choice Award. The series starred Joseph Morgan, Daniel Gillies, Phoebe Tonkin and Charles Michael Davis.

The Originals star made her movie debut in 2006 as Melanie in the horror movie Fingerprints directed by Harry Basil. In 2009, she appeared as Jessica Pierson in a slasher film Sorority Row directed by Stewart Hendler. The movie starred Briana Evigan, Rummer Willis, Jamie Chung, and Audrina Patridge.

Some of her other works include Conception, Musical Chairs, Into the Dark, and The Devil’s Hand.

The Californian actress has an estimated net worth of $1 million. Her main source of income is her movie and TV career. As per some online sources, a TV star averagely earns a salary that ranges from $150k to $1 million.

In 2017, her fans raised over $1100 for Love is a Louder charity to spread love and support for her and also against internet bullying.

Leah Pipes married her longtime boyfriend, AJ Trauth (a musician and actor) on 6th December 2014 at the Four Seasons Biltmore in Santa Barbara, California. Their families and friends attended the ceremony. The couple tied the knot following an 11-month-long engagement.

CAPTION: Pipes married her longtime boyfriend, AJ Trauth (a musician and actor) in 2014, but the couple separated in 2019 SOURCE: [email protected]

Sadly, the couple separated and Pipes filed for divorce in May 2019.

Did you know? She is an animal lover and has two dogs and a cat.

Here is the video where Leah Pipes talks about her role in The Originals: