Laurens van Leeuwen is a Dutch model, businessman and business consultant who grabbed media attention for being the spouse of the Dutch model, Romee Strijd. The love birds have been married since 2018 and have welcomed a beautiful daughter, Mint van Leeuwen.

Laurens van Leeuwen was born in November 1990 in Zoetermeer, South Holland, Netherlands. As of March 2022, he is 31 years old. The model was born to Bert van Leeuwen, a Dutch TV personality known for movies and TV shows like Het Familiediner, EO Life, The Pa s sion: New Orleans and The Pa s sion. However, no details are found regarding his mother. Lauren has siblings; Carlijin van Leeuwen, Boris van Leeuwen and Pauline van Leeuwen.

The businessman is a good-looking guy with brown eyes and brown hair. He stands at the height of 6 feet 3 inches (194 cm) and weighs around 80 kg. The model seems a fitness freak as he has muscular and attractive looks. His educational qualifications are yet to be revealed.

Who Is Laurens van Leeuwen's Wife?

Leeuwens's wife is Romee Strijd. The beautiful duo exchanged wedding vows in 2018. The pair has been in a relationship since 2010. Further, the love birds are seen enjoying each other's company on different media platforms. They often flaunt their charismatic chemistry on respective Instagram handles. The duo welcomed daughter, Mint van Leeuwen on 2 December 2020. Strijd once revealed her struggle to have a child for two years due to her less weight and weak body condition. 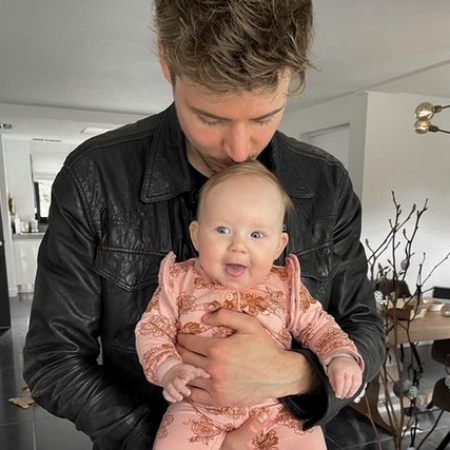 Romee Strijd is a famous Dutch model best recognized as the Victoria's Secret Angel. The 26 years old media personality (born in 1995) was raised alongside her younger sister, Ise Strijd. The model is a beautiful lady with blue eyes and blonde hair. A scout approached her at 13; however, she turned down the offer. Later, she signed to a DNA model agency at 15 and left her education to focus on a modeling career.

Further, Leeuwen's wife started her career officially in 2009. Similarly, Romee is the face of Burberry, Louis Vuitton and Prada. The Dutch personality has appeared on the cover of several versions of Vogue, Unconditional Magazine, Harper's Bazaar, Maxim, among others. She has walked in fashion shows like Alexander McQueen, Calvin Klein, Christopher Kane, Hussein Chalayan, Jil Sander, Vera Wang, Victoria's Secret and more.

Laurens' net worth is reported to be above $600 thousand. Also, some tabloids claim him to have around $2 Million. The model's primary income source is his career as a business consultant. Also, Leeuwen is the co-owner of the clothing line. Besides, he earns good money as a fashion model. The average salary of an American fashion model is $26131, and he might be getting the same. No doubt, the star kid lives a luxurious life with his family. Also, Mint's father has 307 thousand followers on his Instagram handle and may earn good money from his social media presence.

On the other hand, his better half, Romee Strijd, is estimated to have above $1 Million. Strijd's major income source is her successful modeling career. The gorgeous model has added good money to her name from her 13 years long showbiz career. Being a part of different runway shows and magazines, Strijd undoubtedly earned a hefty amount to live a quality life.