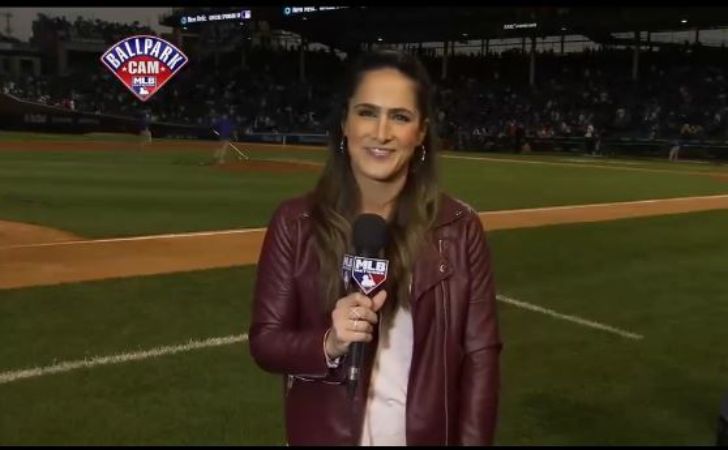 Julia Lauren Shehadi is a very beautiful and talented sportscaster working for the MLB Network.  She has previously worked for CBSSports.com and CBS College Sports Network. She has hosted many of the videos on CBSSports.com.

Who Are Lauren Shehadi's Parents? Age and Height?

Lauren Shehadi was born Julia Lauren Shehadi on 23 May 1983, in McLean, Virginia, U.S. She belongs to American nationality and is of white ethnicity. Her parents are Michael Shehadi (father) and Mary Shehadi (mother).

Shehadi attended Langley High School in McLean, Virginia. She completed her graduation from high school in 2001. During her school days, she uses to play softball for the Saxons.

She then joined the University of Florida, where she served as the host of Gatorzone, an internet-based web show. She was interested in the sorts since her childhood days and even use to go to watch sports events with her father.

Shehadi worked as an intern for The Best Damn Sports Show Period. She served as a sports anchor for KXMC-TV in Minot, North Dakota. She also worked for CBSSports.com and CBS College Sports Network.

She worked as the host for many of the videos on CBSSports.com and was the co-host of the SEC Tailgate show and the ALT Games with Jonny Moseley on the CBS College Sports Network.

Shehadi officially joined the MLB Network in 2012. She has previously hosted The Rundown on MLB Network with Matt Yallof. She currently works as a host for MLB Central with Mark DeRosa and Matt Vasgersian.

She has hosted the ALT Games, The Sec Tailgate, and Fantasy Football Today and has contributed to the 2011 College World Series Home Run Derby on CBS. In addition, she has taken part in Playboy's Sexiest Sportscaster contest in 2009.

Shehadi started hosting a podcast called The Podium in January 2018, a podcast between NBC Sports Group and Vox Media, which focuses on athletes and events at the 2018 Winter Olympic Games in PyeonChang, South Korea.

In October 2018, she worked as the on-field commentator during TBS's coverage of the 2018 American League Championship Series.

Online sources estimate that Lauren Shehadi has a net worth of $1.5 million as of 2021. Obviously, her two-decade-long career as a reporter and sports anchor, notably in MLB Network earned her a considerable sum of money. Back in the late 2010s, her net worth was estimated to be $1.1 million.

Allegedly, she earns a salary in the 6-digit figure from MLB; the average salary of a report in the network is $74,753 annually.

Is Lauren Shehadi Married Or Dating?

The MLB Network sportscaster does use social media profiles such as Instagram (@laurenshehadi) and Twitter (@LaurenShehadi) but occasionally updates on her personal life- let alone about her relationship. Most of her posts showcase her professional career updates.

Currently, in her late 30s, Lauren Shehadi is yet to get married or has a husband officially. Moreover, at the moment, she does not have any publicly disclosed dating story or boyfriend.

Back in February 2018,  while non-profit Project Sunshine on Instagram, fans spotted a ring on her finger and alleged that she could be engagement secretly. But she never talked about that issue.

CAPTION: Shehadi was spotted with a ring on her finger in 2018 that rose up rumors of her engagement SOURCE: [email protected]

Moreover, she was once in a rumored relationship with a guy named Matt, however, no confirmation or substantial proof on their dating came up.

It seems Shehadi is completely dedicated to her career, keeping the bar on her love life, but who knows what the future might bring.