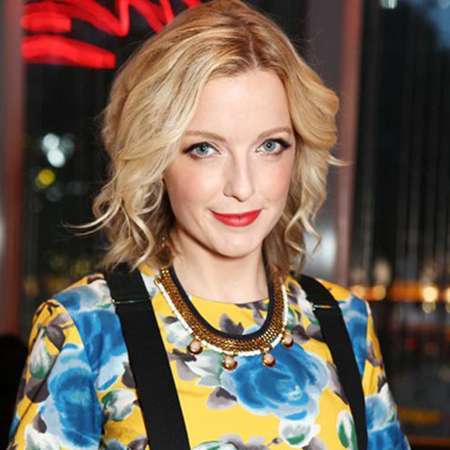 Lauren Cecilia Gofton, professionally known as Lauren Laverne, was born on 28 April in Sunderland, England in 1978. She was born in a large family. Her mother was a teacher and her father was an academic. In 1982, she attended St. Mary’s R.C. Primary school where Lauren befriended with Marie Nixon and later became the Guitarist in the band, Kenickie. Later they both met Emma Jackson.

From 1994 to 1996, she continued to study at City of Sunderland College. During her college life, Laverne, Nixon and Emma along with Laverne’s Brother, Peter formed a teen punk band, Kenickie. As a whole, this band got four top 40 hits and a top ten albums. Laverne became famous for her own style of giving interviews which made her a known contestant on comedy shows like Have I Got News for You and Never Mind the Buzzcocks.

In 2000, she released a solo EP, Take These Flowers Away, which was played at the Reading Festival and made on the top 20 as a vocalist for the first time in her career. At that time, she was preparing for her another solo album but was never released due to the collapse of Deceptive Records.

The talented author also gave her guest vocals in 2004 single, Come Home Billy Bird by Divine Comedy. Laverne’s television work includes as a television presenter on The Alphabet Show, Planet Pop, Loves Like a Dog for channel 4, Party in the Park, Fanorama, Orange Playlist and Pop for five for ITV.

Lauren has also done reporting for RI:SE. She has also appeared as an expert in a music special of BBC One’s Test The Nation. In these years, she has been seen as the host of ITV2’s coverage of events such as BRIT Awards and British Comedy Awards and one of the BBC2’s main presenters for the coverage of the Glastonbury Festival.

Gofton has also presented a documentary for Sky One and a TV show, Buffy the Vampire Slayer, called Buffy: Television With Bite. She was also a regular team captain on the comedy panel show, Elvis Has left the Building for BBC Northern Ireland. She has appeared as a regular guest on the quiz show named HeadJam (2004) and as a host on CD: UK, Saturday morning music show (17 September 2005-april 2006). In April 2006, she appeared as guest host of Never Mind the Buzzcocks and she has also covered the V Festival for Channel 4.

She has also presented the NME Awards live in March 2007. In July 2007, he appeared on the comedy show called Mock the Week and on Dec 14, on Have I Got News for You. In 2008, she appeared on Would I Lie to You? and on the Lily Allen and Friends. She was a regular presenter for the magazine program named The Culture Show and the second series of the late night show, Transmission with T-Mobile. Laverne also narrated Tough Guy or Chicken?

Moreover, she was also a regular presenter for the third series of It’s not Easy Being Green. Laverne joined Xfm London where she co-hosted a Saturday morning show and won Best Newcomer at the Commercial radio Awards in 2004. In June 2008, She rejoined 6 Music and in 2014, she guests edited Woman’s Hour on Radio 4. She has published her first novel, Candypop – Candy and the Broken Biscuits. She has also written about style and British Culture from 2012 to 2014 as a columnist. Laverne launched an online platform mainly for women, The Pool in April 2015.

Moving on to her personal life, she first dated Taylor Parkes from 1997 but they broke up after 1 year in 1998. After some time, she again dated Malcom Middleton. They were engaged and lived together but they separated in 2004. Laverne is married to Graeme Fisher in August 2005. From their marriage, the couple has two children.

Their first child, a boy named Fergus James, was born in October 2007. She announced her pregnancy of her second child through BBC Radio 6 Music show. Their second child, another boy named Mack was born on 20 September 2010. Her net worth is still unknown but looking at her bright career, we can say that she earns very good amount of salary. She has a bright career along with a happy family.

She is a vegetarian and identifies herself as Roman Catholic. There are some rumors about her divorce with her husband on many sites but currently they reside in Muswell Hill, London.