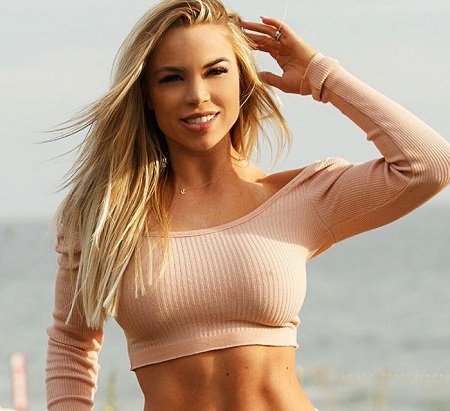 Lauren Drain is a rising American registered nurse, fitness model, and television personality who is also a former member of Westboro Baptist Church. She is also an author who has written a book named Banished, based on her experiences and banishment from the church. She, however, is also famous as Steve Drain’s daughter.

Lauren Drain was born Lauren Danielle Drain on 31st December 1985, in Tampa, Florida, the United States of America. The 34 years old author lived in nearby Bradenton until she was five years old. She then moved to Olathe, Kansas, with her father, Steve.

Lauren grew up with three siblings; two sisters and brother. She studied at Topeka West High School and later earned Wiseman Scholarship at Washburn University. She graduated in 2007 with a Bachelors Degree of Science in Nursing.

Lauren is married to her husband, David Kagan. The pair, who first met back in 2010, started dating in the same year. After dating for three years, the duo got married on 4th August 2013.

During their special day, Lauren had invited her parents, but no one from her family attended the ceremony. She was walked down the aisle by Megan and Grace Phelps-Rope.

HAPPY MOTHERS DAY! Pic 1 or 2 ? I couldn’t decide! Wow! It’s only been a little over 4 months with my sweet little angel baby and it has felt like a lifetime of love and happiness! Happy Mother’s Day to all the mamas and future mamas! What an incredible blessing to be filled with so much love, pride, happiness and laughter. So far this little girl has taught me patience, happiness in simple things, a new love for my body, a new love for life through her eyes and a respect for all the women who we are all proud to call our Mothers. I think back to a time when I didn’t know if I wanted kids and had too much anxiety that motherhood would only bring me stress, a ruined body, bills and zap me of my own identity and happiness but oh how I would love to tell my former self how WRONG I WAS! I simply cannot imagine my life without my daughter and without one of the greatest loves on earth with her. Thank you for making me your Mommy, sweet angel. Mommy loves you forever and I hope you feel my pride and love for you every day. And thank you to Daddy @theiobot for the bouquet of flowers he picked from our yard along with the sweet card “written” from @ariaskyekagan 😘💕 My heart has never felt so full and life so complete until now. Wow I’ve turned into a super sappy cliche, now haven’t I? Going soft, losing my edginess but no regrets! Brb gonna go cry now. 😭🥰❤️❤️❤️

As of 2020, the pair has been married for almost seven years without any issues of divorce or separation issues. Back on 25th July 2019, Lauren and David announced that they were expecting a baby. On 28th December 2019, the duo welcomed their first child, daughter Aria Skye.

After graduating from Washburn University in 2007 with a Bachelor of Science Degree in Nursing, she worked as a registered nurse for around nine years. She then became a full-time fitness model and personal trainer.

Back in 2013, Lauren even participated in the NOH8 Campaign. Likewise, she also published a book, Banished: Surviving My Years in the Westboro Baptist Church.

On the other side, her father, Steve, is a famous producer and film director, known for her marvelous work in documentary movies like Hatemongers, The Best Obama, and Lawrence: Free State Fortress as a director.

How Much Is Lauren Drain’s Net Worth?

Lauren has collected a high figure of salary from her nine years of tenure as a registered nurse. She now earns a considerable figure of money being a fitness model and personal trainer.

Lauren posts and advertises numerous brands on her social media related to fitness, which is also a pretty good source of income.