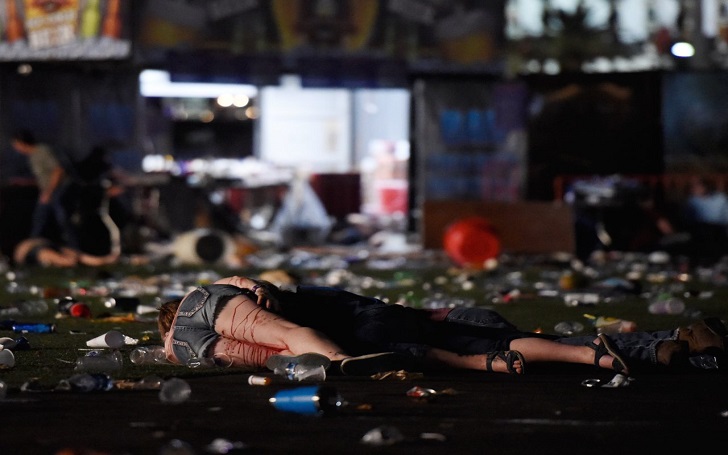 Police have identified the Stephen Paddock as the suspected gunman; they report that Paddock had booked himself into the Mandalay Bay Hotel on 28th September using Ms. Danley's documents as identification proof. A total of 10 suitcases were found in the two rooms in the suite Paddock had booked.

Several bursts of automatic gunfire were heard during a performance by Jason Aldean- according to witnesses hundreds of shots were fired, it was Sunday night-22:08 local time when the shots were first heard.

Concert-goers running or covers during the shooting in Las Vegas

The open firing left of hundreds of concert-goers scrambling for covers, laying flat on the ground, rushing to find the exits or helping others to escape the gunfire as Padded continuously fired shots to the site from 32nd floor of his hotel.

Details About the Gunman

Gunman Stephen Paddock is a 64-year-old man, he reportedly open-fired from the 32nd floor of the Mandalay Bay Hotel where he was staying towards the crowd at an open-air music festival this Sunday evening- 22:08 local time.
Police have found ''in excess of'' 18 explosives and firearms at his home in Nevada and 16 guns in his hotel room. No clear reason for the mass slaughter has come forward till date.

Vegas Strip Dark in the wake of the tragedy

The lights of the Las Vegas Strip are dark tonight in honor of the victims of last night's shooting. pic.twitter.com/iNXkz5KFJo

There has been a claim from the ''so-called Islamic state'', however, investigators say they have found no links to international terrorism. Although some investigators have suggested the reason behind the shooting to be psychological issues, there have been no confirmations.

The gunman had no police records.

President Donald Trump released an address from the White House on Monday calling the attack ''pure evil.''
The shooter, Stephen Paddock, lived in Mesquite, north-east of Las Vegas, he lived in a senior citizens' community.  Paddock reportedly lived with Marilou Danley; police say that she is currently in the Philippines and doesn't appear to be involved in the shooting.