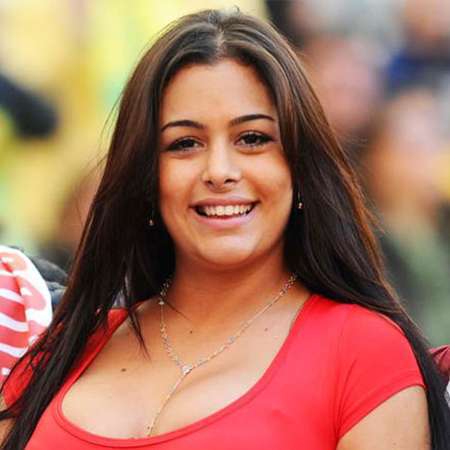 Larissa Riquelme is a Paraguayan model and actress who is one of the highest-paid models in Paraguay. She is well known for being photographed at the 2010 FIFA World Cup supporting Paraguay's national team.

Riquelme has also participated in Bailando for un Sueno its reality show like "Dancing With Stars" in America.

Larissa Riquelme was born as Larissa Mabel Riquelme Frutos on 22 February 1985 in Asuncion, Paraguay. She belongs to white ethnicity and holds a Paraguayan nationality.

Riquelme is the daughter of Limpia Frutos and Roman Florencio Riquelme Ramirez.

The famous model and actress Riquelme rose to international fame during the 2010 FIFA World Cup. A supporter of the Paraguay national football team and the club Cerro Porteno, she was first pictured in media celebrating a goal during the game between Paraguay and Slovakia with her Nokia mobile phone between her breast. She was wearing a t-shirt having Paraguay's colors for the promotion of mobile phone company.

After becoming one of the famous searched people on the Internet, Riquelme was named "World Cup's Girlfriend" by Marca, the largest Spanish sports newspaper. She was also described as the most famous fan of the World Cup.

Following her rise to fame, and after Argentinian coach Diego Maradona promised to run naked through Buenos Aires if Argentina won the 2010 World Cup, Riquelme matched the offer and promised that she would run naked (wearing only body paint in the colors of Paraguay) through Asuncion if Paraguay won the World Cup, or even if they reached the semi-finals by beating Spain.

Apart from modeling and acting, Riquelme has also participated in Bailando for UN Sueno, the Argentinian version of Dancing with the Stars.

Larissa Riquelme has been dating soccer star Jonathan Fabbro since 2013. The couple posts their together photos on Instagram and seem happy with each other. She was also voted the tournament's girlfriend by Marca in 2010.

She is the supporter of Cerro Porteno.

Larissa Riquelme might be earned huge amount of net worth from her career. However,  Riquelme current net worth has not disclosed yet.