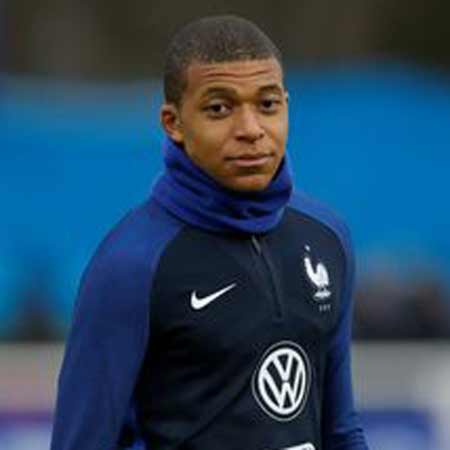 French professional footballer, Kylan Mbappe is playing forward for the team, Paris Saint-Germain after transfer from Monaco on loan. He started his career at AS Bondy. Initially, he was coached by his father and then joined Clairefontaine academy. In 2017, he made his senior international debut for France.

Kylian Mbappe was born Kylian Mbappe Lottin on 20th December 1998 in Paris, France under the birth sign Sagittarius. Mbappe is French by nationality and belongs to Afro-European ethnicity. He is the son of Algerian mother, Fayza Lamari, and football coach, Wilfried Mbappe. He has an adopted brother, Jires Kembo Ekoko (a professional football player) and a younger brother, Adeyemi Mbappe.

Kylian Mbappe started his career in football at AS Bondy. Initially, he was coached by his father and then moved to the Clairefontaine academy where several French clubs, and Spanish clubs Real Madrid and Valencia attempted to sign him after being impressed by his performance. At the age of 11, he went to Chelsea, English Club for a trail playing against Charlton.

Mbappe started his professional career with the Monegasque football club, Monaco or Association Sportive de Monaco Football Club which is also known as AS Monaco.

Mbappe made his club debut in Ligue 1 against SM Caen on 2nd December 2015. He then became Monaco’s youngest player aged 16 breaking Thierry Henry’s record. He scored his first goal on 20th February 2016 in a home Ligue 13-1 win over Troyes. Therefore, he became the youngest first team goal scorer in the history of the team.

In March 2016, Mbappe signed his first three-year contract with the team. On 14th December 2014, he scored his first hat-trick in the Coupe de la Ligue round of 16 at the Stade Louis II. This became the first hat trick by any Monaco player since Sonny Anderson in 1997.

After playing two seasons with the club, he was sent to Paris Saint-Germain (PSG) on a loan.

Paris Saint-Germain announced signing Mbappe from Monaco on loan on 31st August 2017. As per some gossip mongers, he was transferred for $177.34 million with extra $42.81 million add-ons. This made him the second most expensive player after Neymar. After the transfer, he was handed over jersey 29.

Mbappe made his first goal for PSG on 8th September in 2017 in a 5-1 Ligue 1 win over Metz. Four days later, in UEFA Champions League group stage he made his first European goal for Les Parisiens defeating Celtic 5-0.

Mbappe, Cavani, and Neymar had a good chemistry on the pitch and were regarded as one of the top trios in the history.

Mbappe represented his national team in several tournaments. He along with his team won the 2016 UEFA European Under-19 Championships contributing five goals.

Kylian Mbappe has an estimated net worth of around $20 million mark, however, the amount is still under review. Mbappe earns a salary of $324157.01 per week from the club, Paris Saint-Germain.

As of 2018, his market value is $146.79 million. He is also the brand amba s sador for Nike. With the money he earned he has bought many luxurious cars including:

Mbappe has a house near his training center.

Kylian Mbappe is yet to be married. Mbappe is focused on his career with little time to spare for his love life. He prefers to keep his personal life far from the media and audiences.

Mbappe is rumored to be dating Camille Gottlieb, the daughter of Stephanie of Monaco. The couple is often seen together in public, however, has not revealed anything regarding their dating life. So, we can a s sume that he might be possibly single.

Here is the video which shows the extraordinary skills and speed of Kylian Mbappe: