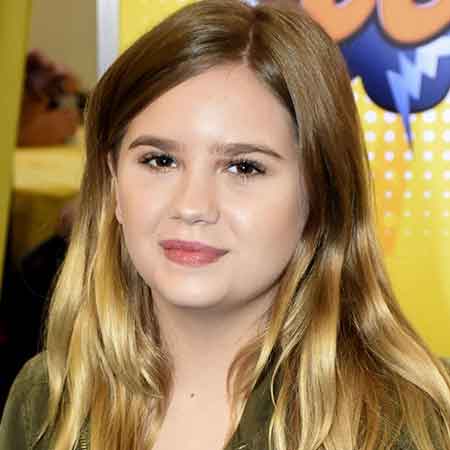 Kyla Kenedy is a rising talent with a knack for both comedy and drama has established herself as one of the most sought-after young actresses in the world of entertainment. Starting her amateur career at the tender age of 8 with a TV series CSI: Crime Scene Investigation, her career gained a substantial boost following her mind-blowing performance in one of the most viewed and loved TV series The Walking Dead. As of 2018, she is playing the character named Dylan DiMeo in Speechless. Kyla has also made her appearances in popular movies such as The Yellow Wallpaper and The Three Stooges.

Kyla Kenedy was born on 4 February 2003, in Charleston, South Carolina. She is an Aquarius which defines her personality, to be Frank, and Imaginative. As a child, she devlop her interest in acting and request her mom to pursue career in acting. And her mother supported her a lot so that she could get a role.

With her passion and dedication in 2011, Kenedy made her acting debut featuring as Fiona Chambliss in an episode of CBS's CSI: Crime Scene Investigation. The year 2012 turned out to be a successful year for her as she landed in the hit feature films The Yellow Wallpaper and The Three Stooges.

In the same year, the actress also appeared in the TV series Doc McStuffins. In 2014, she was cast in the movie Reality and in 2016, she played in another low budget movie Love Is All You Need?. Sharing the screen alongside Justin Bartha, Andrew Rannells, and Georgia King, she made her breakthrough performance in the series The New Normal.

For her iconic role in the series, she was nominated for a Young Artist Award in the category of Best Actress in a Guest Starring Role.

Her real limelight came in 2013 when she took a role in a highly rated TV series The Walking Dead. She appeared in the series from 2013-15 along with Andrew Lincoln, Jon Bernthal, and Sarah Wayne Callies. She has been appearing in the American sitcom TV-series Speechless since 2016.

In addition to her work on screen, Kenedy is also passionate about charitable works. She is engaged with Meals on Wheels and The Children's Hospital of Atlanta.

She has also lent her voice in the animated series, Doc McStuffins for the role  Lara Jill Miller.

It's been nearly a decade since the rising actress Kyla Kenedy is showcasing her wide range of acting skills playing in both movies and TV series. Although the actual amount of her net worth is still under review but considering her work in various projects it can be assumed to be in millions.

Kennedy had a significant role in one of the most viewed TV series The Walking Dead. And the cast members' salary of that show ranges from $40,000 to $60,000 per episode.  In 2012, she was also featured in a movie The Three Stooges which grossed over $54.8 million worldwide against its production of $30 million.

Kyla Kenedy is currently building up her career and is too young to be in a serious relationship. She is quite close to her family and often seen spending her time with her parents in Los Angeles.

She loves reading, traveling, and all outdoor activities.

A rare photo of Hana and I

Kenedy is an avid animal lover has a pet dog named Hana and a cat named Chloe.