Krzysztof Soszynski is one of the versatile personalities in the world. He is a former Canadian mixed martial artist who competed in many International Fight Leagues, and his last appearance was in the Light heavyweight division of the Ultimate Fighting Championship. Besides, he has also worked in many successful movies like Logan, Here Comes the Boom, and more.

Krzysztof Soszynski was born on August 2, 1977, in Stalowa Wola, Poland. He holds Canadian and Polish nationality and ethnicity wise; he is mixed. He grew up in his hometown Stalowa until the age of ten and then moved to Winnipeg, Manitoba, Canada along with his family.

Krzysztof Soszynski subsequently started his career in the mixed martial arts. He made his professional MMA debut defeating Matt Lafromboise in September 2003. Just a month later, he faced Jason Day in November 2003 but lost the match.

In December, Soszynski won over Shane Primmby utilizing the kimura. He defeated former WEC Light heavyweight Champion Brian Stann by submission again due to a kimura. 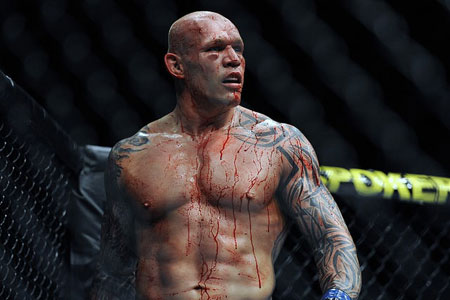 Subsequently, Soszynski faced Goran Reljic at UFC 122 and defeated him via unanimous decision. His last fight was with Igor Pokrajac which he lost in December 2011.

Soszynski announced his retirement from MMA competition on August 15, 2014.

Krzysztof Soszynski has built a successful career in the field of acting. He made his movie debut appearing as a top MMA fighter in the UFC in the movie Here Comes the Boom alongside Kevin James, Henry Winkler, and Bas Rutten. His role in the super hit movie Logan earned him tremendous fame.

Net Worth, Earnings, And Income Sources

Krzysztof Soszynski's net worth is around $2 million, as per celebrity net worth, in 2019. He has collected such a good amount of money from his various works.

Soszynski also played many roles in dozens of movies especially his performance in the ma s sive box office hit superhero movie Logan brought him acclaim as well as a handsome amount of paycheque as the movie grossed over $619 million worldwide.

Krzysztof Soszynski is a married man. He has been sharing a wonderful married life with his wife Geneviève Soszynski for a long time. The loving couple does not have any child. But he has a son from his previous relationship. Neither Soszynski nor his spouse Geneviève has revealed much about their married life.

Krzysztof currently resides in Dubai, the United Arab Emirates, along with his wife and child.