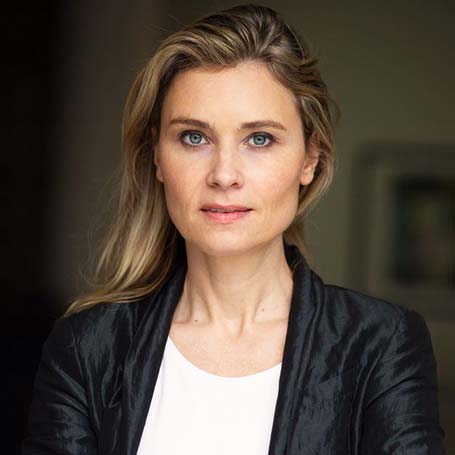 Famous for portraying the character of Navy Lieutenant Cheryl Dombrowski in the American action police procedural television series, NCIS, Kristina Klebe is a German-American actress.  Further, she was nominated for Best Actress at the Downbeach Film Festival in August 2008 for her comedic portrayal of Rita LaMontaine in Public Interest.

Kristina Klebe was born on 18th June 1979 in New York City, the United States to European immigrants’ parents. Though she grew up in New York City, she spent most of her childhood and teen days overseas with her family in Italy, Germany, and France. Her father Joerg Klebe is an Emmy award nominated doc u mentary producer.

Regarding her nationality, she is an American and belongs to white-American ethnicity. She used to play piano and horseback riding in her teen days.

Klebe went to the NYC Tisch School of the Arts. Then, she joined the Dartmouth College c u m laude and majored in Politics and a minor in Theater/Film. Likewise, Klebe also earned masters in directing from the Grad Film Program at NYU Tisch

Kristina Klebe began her career, appearing in numerous Off-Broadway stages shows of NYC. She then debuted in the big screen from the 2004 independent comedy-drama film, She Hates Me as Ruth Lacey, starring Kerry Washington, Anthony Mackie, Monica Bellucci, and others.

After that, she worked in several movies such as Delirious, The Accidental Husband, American Primitive, Zone of the Dead, Desperate Endeavors, and Alleluia! The Devil's Carnival, among others.

Further, she also made her notable role in various television series such as Law & Order, Law & Order: Special Victims Unit, Real Husbands of Hollywood, The Following, and others. Moreover, she is known for role Navy Lieutenant Cheryl Dombrowski in one of the most viewed television series NCIS.

Along with acting, Kristina Klebe voiced in several video games such as Rise of Nightmares for Mary, Friday the 13th: The Game for Jenny Myers, and Wolfenstein II: The New Colossus for Frau Helene.

Besides, she also directed her first debut short film, As Human As Animal, and also produced and directed an ad campaign for the vape company Henley.

Kristina Klebe’s Net worth And Salary

Being a versatile and talented actress, Kristina Klebe certainly earns a lot of money. As of 2019, her net worth is yet to be revealed, however, as per some online sources, Klebe's net worth is $1.5 million.
Besides, she also owns an Oldies radio station, Fox Oldies 98.9 FM / 1220 AM WGNY in New York's Hudson Valley.

She is also involved in charity work, as she worked with a French-American Aid for Children of over 10 years.

Kristina Klebe is a very talented, popular as well as a beautiful actress, but the details of her love life are not available in the public domain. She even hasn't spoken clearly about her relationship status.

There are many online sources, who claims that she is a married woman; however, there is no actual proof to support the statement. She lives a very low-key life and has not been spotted publicly with anyone.

As of now, she lives in Glendale, California.