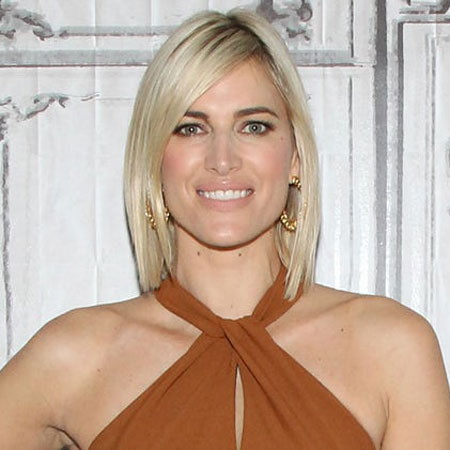 The former Real Housewives of New York cast member, Kristen Taekman is also a model. Initially, she started her career as a model and featured in magazines like Australian Vogue, Harper’s Bazaar and Glamour. She also worked for the advertisement campaigns for L’Oreal and Clairol.

In 2009, she started a greeting card business, 2nd Street Press. She also has a website where she shares some trending fashions. She launched her lipstick and nail polish line, Pop of Color from where she is earning an impressive amount.

Taekman married an entrepreneur, Josh Taekman in 2005. The couple shares two children, Cassius and Kingsley. In 2014, Taekman appeared in the Bravo’s reality show, The Real Housewives of New York Season 6. After working for two seasons, she quit the show following her husband’s Ashley Madison's scandal.

Kristen Taekman was born Kristen Carroll Taekman on 21st April 1977 in Farmington, Connecticut. Her birth sign is Taurus. Taekman is American as per nationality and ethnicity wise she is White.

Taekman at the initial phase of her career worked as a model. At the age of 16, she was discovered by John Casablanca's displaying office. She then moved to New York, Milan and Paris for her work. She modeled for several cover shoots for popular brands and magazines like Glamour, Harper's Bazaar and Australian edition of Vogue.

She also appeared in several advertising campaigns for LÓreal and Clairol. In 2009, she became an entrepreneur and established a greeting card company, Second Street Press.

The Real Housewives of New York

Taekman joined the cast of the Bravo's reality show, The Real Housewives of New York in 2014 from the 6th season of the show. She worked in the show with Bethenny Frankel, Luann de Lesseps, Dorinda Medley, Carole Radiwill and Sonja Morgan. The season's first episode was aired on 11th March 2014.

She appeared up to season 7 and quit the show to concentrate on her family and business. She stated,

''At this time in my life, I have decided to concentrate on my family and my new business ventures Pop Of Color nail polish and Last Night's Look, my fashion blog.''

She also shared her experience while working in the show,

''My experience during my time on RHONY was fantastic and I made some great new friends. I will remain a Housewife and part of an amazing franchise forever and that is what is important.''

During the time it was also revealed that her husband was an Ashley Madison website user.

After quitting The Real Housewives of New York, she started her own fashion blog. She also launched her website, lastnightslook.com. She launched her beauty product line, Pop of Color where she sells varieties of nail polish and lipsticks. She told,

‘’ How has my life changed most lately? I don't know. I really enjoy doing my fashion blog, and I think that's really fun and I think I probably wouldn't have had my platform if I didn't do the show and I think that's great. That's really my full-time job right now that with the pop of color so its fun to have that job, and it's perfect as a mommy job.’’

As of now, she is busy with her work and totally enjoying it.

The Star of RHONY, Romano Singer was paid $1 million for her return on the show. So it can be assumed Taekman also earned around the same range. Her major sources of income are her website, Greeting card company, 2nd Street Pass, and her nail polish and lipstick line, Pop of Color. She sells a Richie liquid matte lipstick for $14.99.

Her favorite brand is Manolo Blahnik. She uses several popular brands including Gucci and Adidas. Also, she released her fitness DVD, JCORE sold at $32.95. She has a paid partnership with HAL cruises.

Kristen Taekman married Josh Taekman in August 2005. Her husband is also an entrepreneur like her. He co-founded a company, Vitalize Labs which produces EBOOST, sugar-free vitamin supplement which is loved by most of the celebrities.

The couple shares two children, a daughter Kingsley Taekman and a son, Cassius Taekman. Their first child, Cassius was born in 2009 and the second child, Kingsley was born in 2012.

In August 2015, her husband was accused of cheating on her with Ashley Madison. It was revealed that her husband had been a user of Ashley Madison's website. He paid $1500 monthly membership charge on the website.  He, however, denied his relationship with Madison. The news totally embarrassed Taekman and following the scandal, she quit the show, RHONY.

Later, her husband apologized for his deeds,

‘’ I signed up for the site foolishly and ignorantly with a group of friends and I deeply apologize for any embarrassment or pain I have brought to my wife and family. We both look forward to moving past this and getting on with our lives.’’

The scandal only made the couple's relationship stronger. Taekman said,

Taekman has done breast implants twice. She did her first boob job after feeling insecure about her body.  In 2014, she did it again which was a 9th wedding anniversary gift from her husband.

Here is the video about details of Kristen Taekman's life: