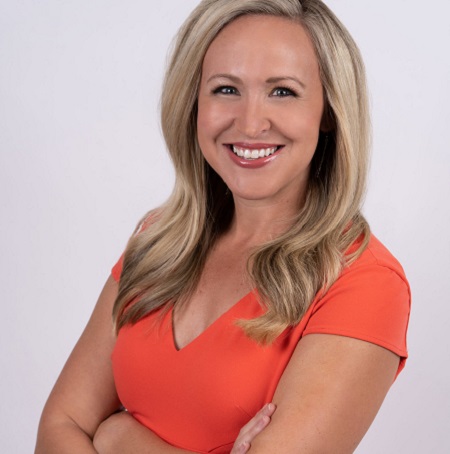 Kris Budden is a rising American sports reporter who is currently linked with ESPN. She grabbed considerable attention for reporting on San Diego Padres. She is also famous for being the current sideline reporter for college football and basketball.

Kris’ full name is Kristen Lee Budden. She was born on 9th March 1984 in Atlanta, Georgia, the United States of America. She, along with her family, moved to Dallas, Texas, at the age of ten.

Kris studied at the Trinity Christian Academy and later attended the University of Missouri’s School of Journalism.

The 36 years old sports reporter started her journalism career serving as a weekend sports-anchor at WCAV. She then moved on to work at WBIR as a sports anchor and reporter to cover the Tennessee Volunteers’ athletics program.

Within six years of tenure, she covered the 2012 Summer Olympics, Pat Summitt’s retirement, and men’s and women’s NCAA and SEC basketball tournaments.

The 36 years old journalist is a married woman. She is married to Mario Toledo, who was a member of the University of Tennessee men’s tennis team.

As per sources, the duo met back in 2012 while Kris was attending lessons from him at the Knoxville racquet club. Soon later, the pair started dating and got married in April 2014, after two years of relationship.

Wishing you a happy and safe 4th of July! 🇺🇸

The pair got married in Charleston, South Caroline. As of now, they enjoy around six years of long marital life without any issues of divorce or separation issues. She is the mother of two children.

How Much Is Kris Budden’s Net Worth?

Kris began her journalism career in 2007 and has been actively working in the field. As of 2020, Kris Budden's net worth is estimated to be around $2 million. Likewise, her salary is around $100 thousand.

According to Tie Breaker, a sideline reporter earns $235 thousand per annum, so she might also be making in the same figure.