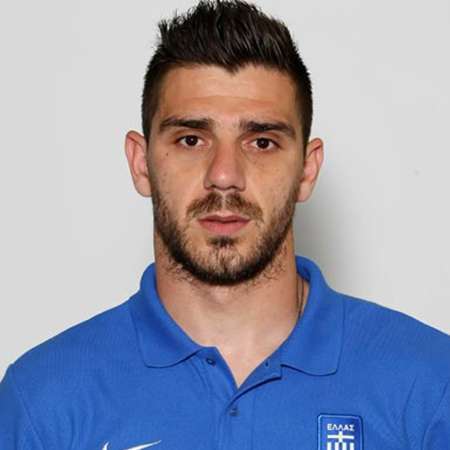 A Greek Footballer, Konstantinos “Kostas” Katsouranis is a renowned midfielder in Greece. Kostas was born in the year 1979 June 21 at Patras of Greece. He is 34 years old now. Kostas chesrishes the height of 183 cm and weight of 81 Kg. Kostas was born and brought up in Greece. He is a married man and a proud father of a child. Efi Katsouranis is the name of his spouse. His favorite holiday spot id Mykonos Island. He has tattooed with number 21 in his hand. He stated that 21 is his favorite number by the time he played for Greece Club A.E.K. Apart from this, rumors said that he has the desire to be back to AEK.

Kostas Katsouranis is a versatile and player having good speed, stamina and strength in the game keeping him durable. He basically plays as a midfielder but also can perform well as a centre back. He has skilled shots and has excellent tackles. He is described as a reasonable goal threat despite being a defensive midfielder. He has good discipline in the game. He is lining up in the field with the current Team of Greece National Team in 2014 FIFA World Cup.

Kostas Katsouranis started his youth career with Doxa Chalandristsa. From the year 1996, he debut his professional career from the Patras-based club Panachaiki at the young age of 16+. He remained in the team till six seasons. From the third seasons, he became a regular starter from the team. He appeared in 123 matches bagging 14 goals for the team. After the contract been finished with Panachaiki, Kostas wanted to move with the bigger club. Because of the transfer negotiations and some issues, AEK Athens took the advantage to sign Kostas in its team for 3 seasons. Kostas joined with AEK in 2002. He appeared in total of 110 matches from this team bagging 29 goals. He had a great start in the team and started to perform well making him one of the best players in the team and became the integral part in the team.

Kostas was the interest of many native as well as foreign clubs for his outstanding performance and work rate. Ignoring all, Kostas signed the contract with Benfica and started to play wearing No.21. He became Benfica Player of the year 2009. He appeared in 80 matches from Benfica making 10 goals for the team. After the end of the contract in 2009, Kostas joined with another Greek Club Panathiakos where he appeared in 4 season’s matches counting 88 matches with 19 goal scores. After the end of this contract, he joined with PAOK in 2012. He is playing from the current Team of PAOK from squad No.28 as a Defensive midfielder. Till date he has appeared in 46 matches with 6 goal scores from the team. He is in the Greece National Football Team since 2003. He plays as a Midfielder in this team as well. He has represented Greece in 100 International Matches making 9 prominent goals for the nation. There is no salary record for Katsouranis. However, the agent of Kostas Katsouranis Juzzt Football claims his market value of worth 1.500.000 Euros.