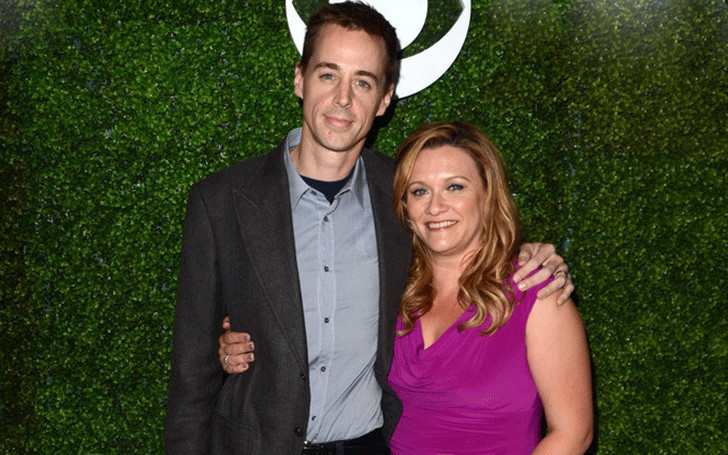 Sean Murray is an American actor who is famous for his appearances in several movies and TV shows. He is currently portraying the role of 'Timothy McGee' in NCIS, a CBS TV drama sitcom.

The actor has been leading his career smoothly but how his personal life is going on? Murray is Carrie James for quite a long time now and the couple also has two children. Let's reveal the mystery of their successful married life, here.

Sean and his loving wife Carrie have been sharing a loving relationship from the past 14-year. First, they met each other at an event in 2004. After some meetings, the two started dating and dated for a year before they exchanged their vows.

They tied the knot on November 26, 2005, in a private ceremony in L.A. They invited some special guests, family, and friends to attend their function. Since then, they have been the adorable pair of Hollywood and we have not heard any complication in their married life, to date. Sean Murry with his daughters

Carrie and I are pretty Zen'd out right now, our 3-year-old will bring us back to reality soon enough!.

Carrie James, a teacher and founder of Prestique Academy, became a celebrity after getting married to Murry. It has been nearly one and a half-decade that the couple are together and still seem more supportive with each other. Currently, she lives in L.A. with a very supportive husband and two cute daughters. The couple also split their time in Guildford, the United Kingdom with their two adorable kids.

The 39-year-old actor debuted in the entertainment industry from 1991 TV film named Backfield in Motion and in the same year, he appeared in an episode of TV sitcom Civil Wars. Following year, he featured in a short film named Too Romantic.

thanks out to Home and Family - had a blast today ;) check it out Thursday at 10am/9 central on Hallmark Channel@HomeAndFamilyTV#NCIS pic.twitter.com/9UIXfUX2GU

In 1993, Sean worked in Disney's hit film named Hocus Pocus and The Boy's Life. Since then, he has been featuring in various TV shows and films till now. The actor is playing as a special agent in CBS series NCIS since 2003 along with Mark Harmon, Sasha Alexander, Michael Weatherly, and many others.