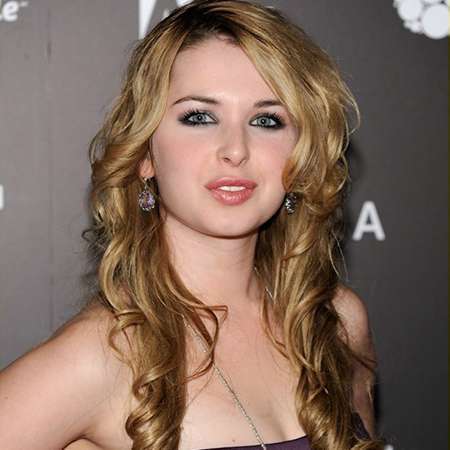 Canadian actress, Kirsten Prout is famously known for her role in the ABC's TV series, Kyle XY and The Lying Game. She also worked in several TV series and movies from where she earns huge appreciation. Regarding her personal life, she is married to her boyfriend Matt Zien since 2017.

Kirsten Prout was born on 28th September 1990 in Vancouver, British Colombia under the birth sign Libra. Prout is Canadian by nationality and belongs to White ethnicity. Her parents raised her with her younger sister, Jennifer Prout.

When she was the child she used to imagine herself as one of the characters while watching Disney movies. As she grows old her desire towards acting increases gradually.

She attended Collingwood School in West Vancouver, British Columbia with Alexander Ludwig and Makenzie Davis. At the age of 13, she received a Black Belt in Taekwondo. Prout did major in English literature at McGill University.

Prout has started acting at the age of 10. She has stated that she too the decision in acting was her teacher’s response when she was in 2nd grade.

Kirsten Prout worked as Young Tracy Wellman in her first movie, Mindstrom. She made her feature film debut in 2005 at the age of 13, in film Elektra as Abby Miller. The movie starred Jennifer Garner and Goran Visnjic. Even if the film did not get much success at the box office, Prout landed in various movies and TV series afterward.

The film’s producer Gary Foster said about her,

We did a big search... and frankly LA or New York, we thought we'd find somebody there. She came in and auditioned and we were blown away.

In 2010, Prout portrayed the role of Lucy in a romantic fantasy film, The Twilight Saga: Eclipse with Kristen Stewart, Robert Pattinson, and Taylor Lautner. She then worked in No Clue, Joy Ride 3: Roadkill and Even Lambs Have Teeth.

Prout made her TV debut in 2000 as Stella in a TV film, The Linda McCartney Story. She then worked in several TV movies and TV series in a minor role which includes the First Wave, Once Upon a Christmas, Twice Upon a Christmas, and The Dead Zone among others.

Her breakthrough came in 2006 as Amanda Bloom in ABC's sci-fi TV series, Kyle XY where she shared the screen with Matt Dallas, Jean-Luc Bilodeau, and Jaimie Alexander.

Her acting was highly appreciated by both fans and critics. One of her popular work includes 2011's TV series, The Lying Game where she was a s sociated from 2011 to 2012 appearing in 12 episodes.

In 2015, she did two TV movies; The Wrong Girl and My Life as a Dead Girl.  In 2017, she appeared in two episodes of the TV series Dear White People.

Her two TV movies (Woman of the House and The Christmas Train) came out in 2017. In 2018, she completed her new project Captured and Somebody Else.

Kirsten Prout has an estimated net worth of $1.7 Million according to biographynetworth as of February 2019.

She earns a decent paycheck from her movies and TV series. As per some online sources, a TV star averagely earns a salary that ranges from $150k to $1 million.

Besides acting, she is also involved in the jewelry business from where she earns a huge amount. She posts several pictures of jewels on her social media. The actress prefers to use Channel accessories.

Kirsten Prout is a married woman. She tied the knot to her boyfriend, Matt Zien who is a development director. On 13th October 2017, the couple got engaged. Prout announced her engagement via Instagram by showing her huge diamond ring.

The couple began dating back in 2012 and since then, they hide their relationship from the general public.

Finally, on 6 November 2017, the pair exchanged the vows in front of their friends and families. Both of them was looking great as ever. In the ceremony, the bride wore a white long gown whereas the groom was dressed in a three-piece grey suit.

The couple is together for years but ha no children yet. Moreover, they are still free from any type of rumor about their divorce and extramarital affairs. Besides, some of her hobbies include wakeboarding and swimming. She likes to pet animals as she has three cats.

Her husband Matt Zien is a development director for numerous films and TV series. He has worked in a dozen entertainment projects. He also directed two episodes of doc u mentary series True Life.