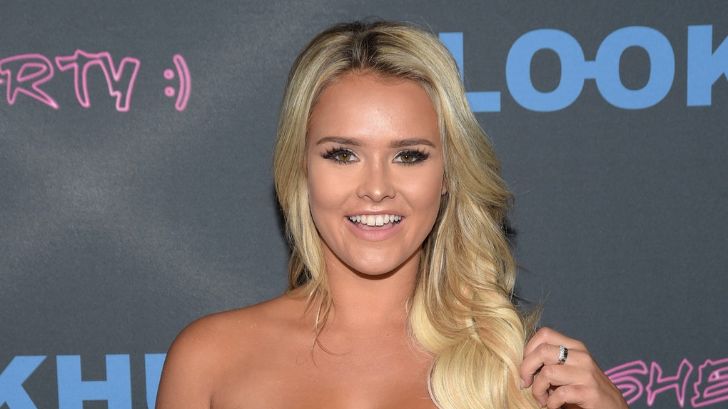 Kinsey Wolanski, a Russian-born & currently United States-based fashion model and Instagram sensation came to the limelight in 2019 after she sprinted with a bikini on the field during the 2019 UEFA Champions League Final. Shortly after her video went viral, Wolanski saw showering followers on social media & has since grabbed fame on platforms such as TikTok and YouTube too.

When and Where Was Kinsey Wolanski Born? Age & Height?

Wolanski, also nicknamed Kinsey Sue, was born on August 30, 1996, in Russia. Her family moved to the United States; as a result, Kinsey is a Russian-American by nationality. She has a younger brother.

During the 2019 Champions League Final in Spain between Tottenham Hotspur and Liverpool on June 1, 2019, Kinsey rushed to the field in a swimsuit that caught headlines & went viral shortly after. While running through the field, Wolanski boasted the print on her swimsuit on her chest that read 'Vitaly Uncensored'. 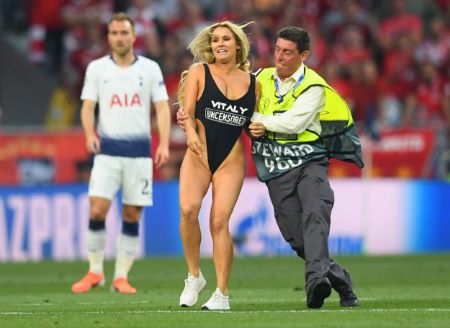 CAPTION: Wolanski got fame overnight in Instagram after she ran in a swimsuit through the field during the 2019 UCL Final SOURCE: Metro

It was not long enough she was resisted by security personnel and was later locked in a Spanish jail cell for five hours. The main purpose of the incident was to promote the website of her (now ex) boyfriend Vitaly Zdorovetskiy, a YouTuber & a former adult film star.

But it was not the only stunt she pulled. In the Ski World Cup in Austria in 2020, Wolanski halted the game as she ran out of the crowd holding a banner 'RIP Kobe', as a tribute just days after the NBA star died in a helicopter crash.

Back in 2014, Kinsey's then-boyfriend Vitaly had pulled in a not-so-decent stunt during the 2014 World Cup final and was banned from all football stadiums. Seems, he left an influence on the Russian-American model.

Later, in 2021, at the Super Bowl LV (Kansas City Chiefs vs Tampa Bay Buccaneers) amid coronavirus pandemic, Vitaly ran through the field from the stands to the end-zone; an attempt to gain publicity for his X-rated site "Vitaly Uncensored" which was printed on his apparel. Eventually, he was taken to the ground & escorted out with handcuffs.

By her late teens, Wolanski was active in modeling & states that she became a model after being approached while visiting Los Angeles. Moreover, in 2017, she competed & finished 8th in Miss Jetset. But ever since the 2019 UCL incident, Kinsey has been in the broad limelight.

Even though her IG account was reportedly hacked, she later got recovery & has over 3.7 million followers on her official Instagram (@kinsey) in 2021. Throughout these years, Kinsey Wolanski was featured on Sports Illustrated and Maxim; and also appeared on the cover of Blvd Magazine. 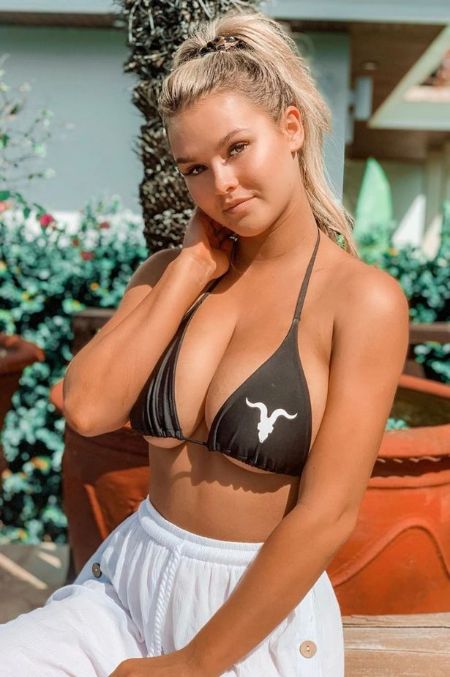 CAPTION: Kinsey Wolanski turned into modeling since her teenage & has been featured in Maxim & Sports Illustrated SOURCE: Mirror

Often her contents are prank videos; her first YouTube video GIRL MOANING IN THE GYM PRANK! was posted on August 3, 2019, while the most viewed video (so far in 2021) is Sugar Daddy in Public Prank with Tanner Fox!!!, posted on December 18, 2020, has more than 8.4 million views.

In addition to that, she did make film appearances as well; worked in Slasher Party (2019) and Ass Clowns: Constipated (2021).

Does She Use TikTok?

Kinsey Wolanski is an avid fan of TikTok & shares videos of lip syncs, pranks & TikTok challenges. Her account with the handle @kinseywolanski has over 2.1 million followers & 20.5 million likes. She was a part of the TikTok personalities collective The Hype House.

Net Worth Of Kinsey Wolanski In 2021

Not to mention that instant fame along with a burgeoning success as a model & YouTuber, Kinsey grabbed huge fame. But it did gain her a considerable fortune too. In 2021, Kinsey Wolanski has a net worth of $600,000.

Currently, she serves as the brand ambassador of Bang Energy, a vitamin/supplement product. Also, a fitness enthusiast, she runs an online fitness line Kinsey Fit. As per her Instagram bio, Wolanski is a stuntwoman, investor & licensed skydiver too.

As per calculation from Influencer Marking Hub, the Russian-American can grab $7,368 - $12,280 per sponsored post on Instagram, while her TikTok account has estimated earnings of $1,200 - $2,000 per post. In addition to that, the Social Blade report that her YouTube channel makes in the range of $1K - $16.7K per year.

Previously, Kinsey was in a 2-year relationship with then-boyfriend Vitaly Zdorovetskiy. They began dating somewhere in 2017 but broke up in December 2019. Her former flame, known as VitalyzdTV, came to YouTube prominence after posting a video titled "Miami Zombie Attack Prank". 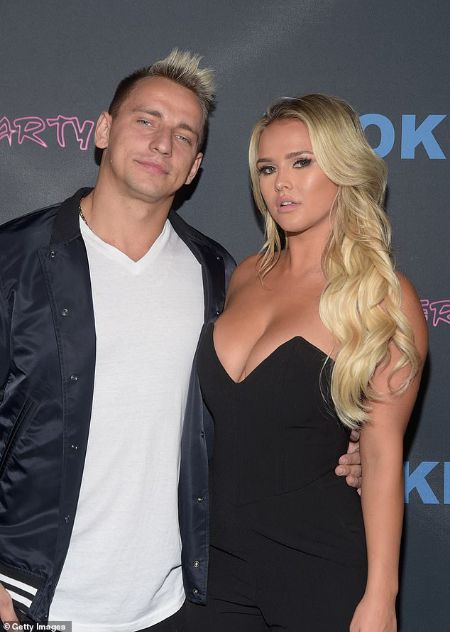 Since then, she is low-key about her dating life. No report on her boyfriend or past relationship is out.

In August 2020, Kinsey's father Daniel married in a traditional country-style ceremony in Tehachapi, Kern Country, California which she shared on her Instagram. Though, she never opened up about her new mother or her biological mother.

As for talking about Wolanski's alluring appearance, many rumors circulate online alleging she underwent plastic surgery to enhance her beauty. But Kinsey has never confirmed the news officially.