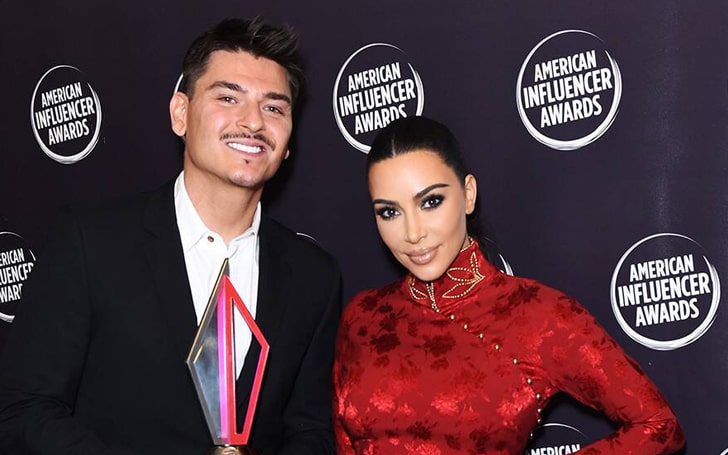 Mario Dedicanovic, Kim Kardashian's makeup artist, has come out of the closet. The 37-year-old makeup artist, who is famous on social media as Makeup by Mario, got emotional when he talked about his sexual orientation following he received the Artist Achievement Award at the American Influencer Awards in LA.

After Kim Kardashian West handed the award to Dedivanovic on Tuesday evening, he delivered a powerful speech revealing his sexuality. He said how he was "living in fear." Then, Dedivanovic said that a couple of days before he told his mother:

I had spent my entire life and childhood suppressing my thoughts, suppressing my dreams, my feelings, my creativity and trying to be invisible so that no one would know how I'm feeling inside.

He went on saying,

I stand here for the first time in my life a proud 37-year-old gay man. I finally feel that bright light that I've been dreaming of my whole life is pouring from my soul around my body and it's mine.

Dedivanovic further said after he told his mother about his feelings, the latter urged him not to live in shame or fear anymore. In addition, he said lots of young boys and girls might be living in fear and pain as he did. While saying that, Dedivanovic also revealed he had thought of suicide at some point of his life.

The makeup artist further said people like him are scared to be themselves because their culture, family, and friend circle judged them. Later in the night, Dedivanovic took to his Instagram sharing the footage of his speech with over 7 millions of his followers on the platform.

Following his speech, the Keeping Up with the Kardashians star Kim Kardashian West took the stage to praise Dedivanovic. She said he is one of her best friends who has created some of her most magical memories. She added,

We've worked together for 11 years, so 11 years of fights. You guys, we fight like you don't even understand. We fight like brother and sister. But he's created some of my most magical memories and really I believe made me who I am today.

Well, KKW and her makeup artist, Dedivanovic, kept the information a secret for quite a long time. However, now, it is official that the reality star and socialite, Kardashian, and Dedivanovic are going to launch their new beauty product this November.

According to Grazia, the KKW x Mario collection, The Artist & Muse would be launched on November 22 on the KKW Beauty website. The pair's new product is a celebration of their 12-year working relationship, said the outlet.

The impending collection comprises of an eyeshadow palette, gloss with an ultra-high shine formula, velvet matte finish lipstick, lip liner, and sheer matte peach blush. Meanwhile, Dedivanovic recently took to the official Instagram of KKW Beauty, sharing the new product where he said the product means the world to him.

“This collection is a celebration of all things Mario with beautiful shades that can really be used to make so many different looks based on each person individually. “ - Kim #KKWxMario: The Artist & Muse launching 11.22 at 12PM PST on KKWBEAUTY.COM‬

After revealing the launch date, Kim Kardashian West and Mario Dedivanovic have been promoting their new product on their social media. Both of the artists have been featuring several photos on their Instagram in the last few days.