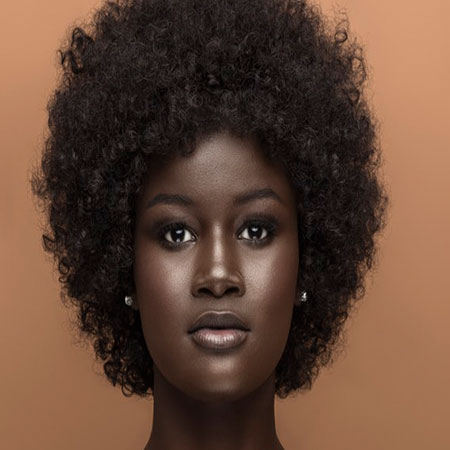 Khoudia Diop is a Senegalese fashion model who is famous for her dark skin. She is also known by her self-proclaimed name Melanin Goddess. Diop began her career as a model after she moved to France and gained fame after began modeling for The Colored Girl agency.

Khoudia Diop was born on December 31, 1996, in Senegal under the zodiac sign Capricorn. Khoudia lives a low-key life and has not shared much about her childhood and parents, however, as per the sources, it was revealed that she has an older sister and a brother.

When Khoudia was at the age of 3, her mother moved to the USA for her work and was raised by her Aunt. She surely lived a tough childhood as she was often bullied by other kids because of her dark skin tone.

After some years, she moved to France with her Aunt because her aunt had to go through eye surgery. She was 15 when she went to France and later attended Lycee Suger High School there.

While she was 17 se moved to New York to live with her family.

When Diop was in Paris, she attracted many modeling agencies because of her skin. Photographers would literally stop her on the street to take her photo. She started doing modeling in Paris and began working for many famous fashion brands. As she grew older she moved to New York City in 2016 for her college.

Khoudia was featured in a campaign for The Colored Girl Project which led her to gain more popularity on Instagram. Khudia who is known by the name of melanin goddess made her appearance in 2017 advertising campaign for French cosmetics brand Make Up For Ever.

CAPTION: Khoudia Diop along with other models from The Color Girl SOURCE: topsimages

Khoudia who is a full-time student and a model became the talk of the online community through social media and multi-press outlets.

Khoudia Diop has the net worth of thousands of dollars, however, the exact figure is not revealed yet. Her main source of income is modeling. According to Gla s sdoor, in the USA, a fashion model usually earns between $25 and $300 per hour which equates to $52,000 to $624,000 per year (40-hours per week).

Khoudia Diop aged 22 (2019) is single and not dating at the moment. She is focusing on her career as a model and is also busy with her studies.

But a year ago in 2018, there was a rumor about her having a romantic affair with someone.  According to her Instagram, she uploaded a photo with Shaun Ross; a singer and a model. On February 27, 2018, she posted their photo hugging each other with the caption My boo ?. But both of them have never accepted their relationship.

You May Also Like: Iman had, Kara Young, Hermann Nicoli, Oumie Jammeh