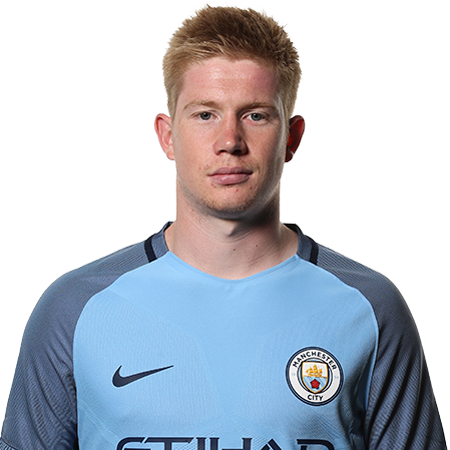 Kevin De Bruyne is a professional Belgian footballer born on June 28, 1991, in Drogen in Belgium. As of 2018, he is playing for English Premier League club, Manchester City wearing jersey #17. Bruyne primarily plays as a central or attacking midfielder but can also play as a second striker and a winger. He is considered as one of the best modern-day players for his long pass ability and shooting from long range.

Born on June 28, 1991, in Drogen, De Bruyne developed a passion for football at a young age. Raised in his hometown by English mother born in Burundi, he watched from his house as young people play football in the local ground, developing his interest in the game.

At the age of 6, he joined KVV Drongen's youth academy and trained in the club till 1999. In 2003 he made debut for the club and after two years joined Gent. He continuously played in the youth set-up and was selected in the first team in 2008 after moving to Genk.

He debuted in the first team for Genk in a 3-0 lose against Charleroi. With that performance, he became quite close to establishing himself as one of the regular members of the squad. He netted his first goal for the club on February 7, 2010, in a 1-0 victory against Standard Liege. His spell in the club ended with 16 goals in the 97 appearances.

In 2012, he transferred to Chelsea signing a five and a half year contract. He made his debut for Chelsea in a friendly match against Seattle Sounders FC. At the end of 2012, Chelsea announced De Bruyne's transfer to Bremen on a season load and scored his first goal on September 15 of the same year. After a year stay in Bremen, he returned to Chelsea.

On January 18, 2014, he went to Wolfsburg for a fee of €22 million. He played three seasons with the German club debuting on January 25, 2014, in 1-0 loss against Hannover 96 at home. He scored his first goal for the club in a 3-1 win against Hamburger SV. For his spectacular performance in the 2014015 season with 16 goals and 17 assists, he won the Footballer of the Year in Germany.

On August 30, 2015, he signed a six-year contract with Manchester City for a reported fee of €75 million. He debuted for City in a match against Crystal Palace on September 12, 2014, replacing injured Aguero. His first goal came against West Ham United on September 19, 2014. On January 22, 2018, De Bruyne renewed his contract with City and will play for the club till

He made his international appearances at U-18, U-19, and U-21. He made his senior team debut on August 11, 2010, against Finland. He was a regular member of Belgium Team during 2014 FIFA World Cup Qualification campaign. De Bruyne assisted Marouane Fellaini to score a goal against Algeria in their first game in FIFA World Cup 2014. He scored in the round of 16 against the United States.

He is included in the 23 man squad to represent Belgium in the FIFA World Cup 2018. Their first match of the competition is against Panama.

De Bruyne was in a romantic relationship with Caroline Lijnen. He once allegedly attacked Thibaut Courtois, his former Chelsea teammate while training for Belgian International team as they were rumors that Courtois had an affair with his then-girlfriend.

CAPTION: De Bruyne and his wife and kid SOURCE: Twitter

As of 2018, he is a married man. He tied the knot with his girlfriend Michele Lacroix in June 2017 after a year of the birth of their first child, Mason Milian De Bruyne on March 10, 2016.

As of 2018, De Bruyne's net worth is estimated to be around $30 million. He earned the hefty fortune playing for many reputed clubs. His current market value is $17,420,250 million. He also makes a decent sum from his endorsement deal with Nike. He wears Nike Magista Obra II boot.