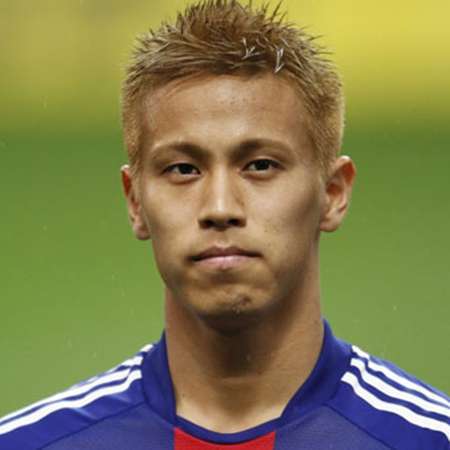 Keisuke Honda was born in the year 1986 June 13 at Settsu, Osaka Prefecture, Japan. He came from a sporting family.

Keisuke was born and brought up in Japan. He plays as an attacking Mid-fielder from the Current Team of A.C Milan from squad No.10 and from the National Football Team of Japan.

Keisuke Honda is a talented left-footed midfielder who plays in the attacking role. He is a versatile player who can play as a second striker or deep-lying playmaker. Keisuke is known for his durability in the game having enough strength and stamina in the game. He has an excellent vision of the game.

He is best known for his dribbling capabilities, passing and shooting skills. Besides, he is excellent when it comes to free kicks.

Honda started his youth career from his native club called Settsu in the year 1994. In 1999, he moved to Gamba Osaka for two seasons and joining at Seiryo High School in the year 2002. He played for Seiryo in two seasons.

In 2005, Honda made his debut in the professional football arena from the club Nagoya Grampus. He spent two seasons in this club appearing in 90 matches with 11 goal scores. After the experience at this club, Honda signed a two and half year deal with Eredivisie club VVV-Venlo in 2008 appearing in 68 matches and bagging 24 goals.

In his first 6 months at VVV, he experienced relegation as the club slid down to the second division from first. But making 16 goals in 36 league matches, Honda helped the team to back up their position in first division leading him to earn the name of “Keizer Keisuke” (Emperor Keisuke) from his fans.

Keisuke Honda is in the national team of Japan since 2008 and has the experience of playing in the under 20 and under 23 National Team of Japan. Honda has represented his Nation in 53 matches bagging 20 goals so far.

Keisuke Honda's net worth is expected to be around $5 million at present.

According to the 2014 salary statistical record, his salary is mentioned to be $3.2 million. His current market value is $4.6 million.

The professional footballer cherishes the height of 182 cm and body weight of 74 Kg. He is a married man.

Misako Honda is the name of his Spouse. She is a kindergarten teacher. They got married in the year 2008 and are the parents of an adorable son.