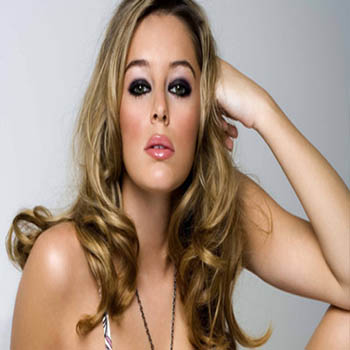 Keeley Hazell is an English model and actress. She is also known as Kee Sexy. She is noted as an English Page 3 Girl and glamour model. She is recognized for her large natural breasts of size 32 E. She became one of the most successful glamour models of Great Britain, working with brands such as Page 3, FHM, Loaded, Nuts, and Zoo Weekly, and has also made numerous television appearances. More recently, she is focused on her acting career, appearing in films such as Horrible Bosses 2 (2014).

Keeley Hazell was born in Lewisham, England in the year 1986 September 18. She is the daughter of Amber and Roy. Her mother was a dinner lady, and her father was a window fitter. Her parents separated when she was 13 years old.

Hazell grew up in Grove Park and attended Ravensbourne School in Bromley. She left her school to work as a hairdresser when she was 16 years old.

As her colleagues encouraged her to try out modeling, she participated in The Daily Star’s “Search for a Beach Babe” competition at the mere age of 17. Eventually, she won the competition. Since she was a minor to pose on Page 3, she went to study fashion at Lewisham College.

Hazell belongs to British nationality and regarding her ethnicity, she is a Caucasian.

As the contest prize, she won sexy clothes worth 10,000 pounds, one-year membership of the Rex Cinema and Bar, and a one-year exclusive glamour modeling contract with The Sun. Since then, the modeling career of Hazell started and has appeared in several shows.

Hazell and her agent Ginny Mettrick co-founded a modeling agency called Muse Management in 2008. In 2009, there was news that Hazell has given up modeling to pursue her career in acting but later in 2012, she made her return and appeared on the front cover of the July issue of FHM.

Talking more about Hazell, she is active in charity as well. She was named as the ‘environmental hero” for her campaigns in The Sun by the Conservative leader David Cameroon, where she used to give environmental tips as turning off the lights during the day.

She is active in a breast cancer awareness campaign for Breakthrough Breast Cancer. She has also been in the face of advertising posters for PETA that work against killing animals for vanity.

In 2014, the actress played the role in the movie Horrible Bosses 2 along with Jason Bateman, Charlie Day, and Jason Sudeikis.

Keeley Hazell's Net Worth And Salary

Keeley Hazell's net worth is $5 million at present. She has earned a good amount of salary from her career as a model.

Hazell was one of the most popular Page 3 models of all time and has appeared on dozens of international men's magazines including Nuts and FHM. She is currently a burgeoning actress with several small parts in movies and television shows.

The model also posed naked in advertising posters for PRTA.

Hazell is a very beautiful, sexy, and young celebrity.

She has beautiful Hazell eyes and dark brown hair. Keeley Hazell is very attractive and can grab the attention of any man. Hazell has a beautiful pair of long and toned legs that adds charm to her glamour.

In early 2007, a sex tape of her with her ex-boyfriend Lloyd Miller had been released on the internet. Following the release, she had called the police to find out who leaked the video. The video is still widely available on the internet.

Talking more about the personal life of Hazell, she is still single. She has never been married thus has no husband or children. She might be dating some guy recently but there has not been any information available regarding her affair or who the guy is.