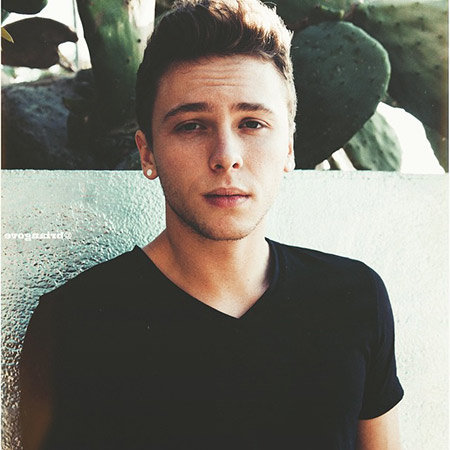 Keaton Stromberg is an American singer, songwriter, and a musician. He gained fame after participating and performing in the reality television music competition ‘The X Factor USA’ as part of the band ‘Emblem3’.

He is the founding member of band ‘Emblem3’ along with his brother Wesley Stromberg and friend Drew Chadwick.

Keaton Stromberg was born as Keaton Robert Stromberg on July 16, 1996, in Sequim, Washington, United States. Regarding nationality, he is American. He has German, English, Welsh, and 1/16th Danish ancestry. His zodiac sign is Cancer.

Keaton Stromberg's father William Stromberg is a film composer. His mother Laraine Clarie, is a professional harpist, and composer. He is the nephew of Robert Stromberg who is a Film director, special effects, artist, and designer.

Keaton Stromberg joined the reggae-pop band Emblem3 after he was forcefully invited by his brother Wesley Stromberg, who is also the band member with Drew Chadwick. He quit the band temporarily but he eventually returned later.

He played a number of small shows with the band before they auditioned for The X Factor (USA). Emblem3 got through the audition in 2012 and finished in fourth place on the second season of The X Factor. Subsequently, the band signed with Simon Cowell’s Record Label Syco Records and Columbia Record in 2013.

Later, Keaton and Wesley released a self-titled EP, "Forever Together,"  after Drew left the band in June 2014. Later, the band toured and went silent on social media for a few months. In July 2015, the band announced they'd be going on hiatus. Since then, Keaton went on to pursue his musical career alone and released a single "Never Getting Older.”

Keaton Stromberg covered a number of songs on YouTube and wrote a song about his grandfather, who had passed away. Keaton is not married yet and so far does not involved in any affair.

According to various sources, Keaton Stromberg is possibly single. He does not have a girlfriend. However, once in the year 2015, he was rumored to be dating Lauren from Fifth Harmony.

Keaton Stromberg is popular but controversy has not affected his career. He has not mentioned about his sexual orientation. However, his sexuality believed to be straight.

Keaton Stromberg has reached the age of 19 now. He has a height of 5’7, which is around, 1.7m. His weight is unknown at this time.

Net worth and Social Sites Involvement

Keaton Stromberg is one of the sparkling stars in the world of music. He has millions of fans and followers who follows him on social networking sites. His fans are largely growing on Instagram and Twitter. He has maintained a pretty amount of bank balance from his career earnings. He has not mentioned about his net worth.