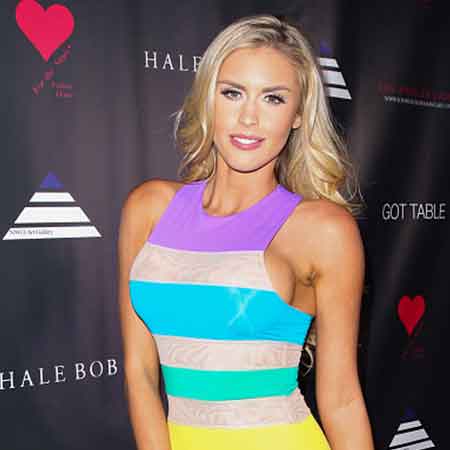 Kayla Rae Reid is an American model who appeared in a Playboy magazine as a Playboy Playmate of the month in July 2015. Prior to modeling, she worked as a Monster Girl for the energy drink company called Monster Energy doing in-person promotions. She is also popular for being a wife of Olympic swimmer Ryan Lochte.

Kayla Rae Reid was born on 5 July 1991 in Fairfax, Virginia, the United States of America and moved to Palm Springs, California when she was 10 years old.

Her zodiac sign is cancer which defines her personality to be sentimental and Deeply intuitive.

Ried has maintained a low profile life and has revealed information about her parents, siblings, and educational background.

As per the reports, Reid was into cheerleading during her college days and later she pursued modeling. She started doing several small promotions and advertisements.

Reid worked as a Monster Girl, modeling for the energy drink company Monster Energy.  She worked there with Monster's motorsports circuit and used to do in-person promotions for the company.

In 2015 she got her big break after appearing as a model for the famous Playboy Magazine. Reid became Playmate of the Month in July 2015. It was then when she made quite the name for herself in the modeling field.

Furthermore, according to Daily Mail, she is also a social media amba s sador and host.

Raid career in the entertainment industry has helped her to acc u mulate a staggering net worth. Her exact net worth is unknown, but we can a s sume it to be in millions.

The average salary of a model is $21.38 per hour in the United States of America. She appeared as the Playmate of the Month and as per the sources Playboy pays her around $25K.

On the other hand, her husband Ryan Lochte, who is a swimming world champion has a net worth of $6 million.

On 9 October 2016, Kayla Rae Reid got engaged to her longtime boyfriend Ryan Lochte who is swimming world champion and 12-time Olympic medalist. Lochte proposed her in the hills of Los Angeles, California in the most romantic way possible.

The couple first met on the dating app called Tinder. She revealed about the engagement by posting pictures of them kissing after the proposal on Instagram.

On 14th December 2016, the couple announced that they were expecting their first child and welcomed their son named Caiden Zane Lochte in June 2017.

After being engaged for over a year, they married at a courthouse in Gainesville, Florida in 2018.

Almost a year after welcoming a son, Reid shared her battle with postpartum depression. She tried to recover by hearing stories from other moms who also had the same experiences. She said,

Hearing other people’s stories gave me so much hope in myself, and to not give up.

“It makes me so sad because you don’t want to feel like that because you just gave birth to something. You know you are their everything, and everything you do is for them. I don’t know why I felt like that, but I did.”

She also took medicines as per the doctor's prescription.

I did my research and talked to my doctor, and he prescribed me Zoloft, which I am still currently on.

I think it gave me a little bit of my motivation back,” shares Reid, who adds that it took her three months on the medication before she started “seeing a change.”

Now, she is focusing on her fitness. She has ama s sed a sizable social media following. She is more famous on Instagram and has more than 417k followers as of July 2018. She is also active on Twitter and Snapchat. Similarly, her profile has been featured on a few celebrity sites.