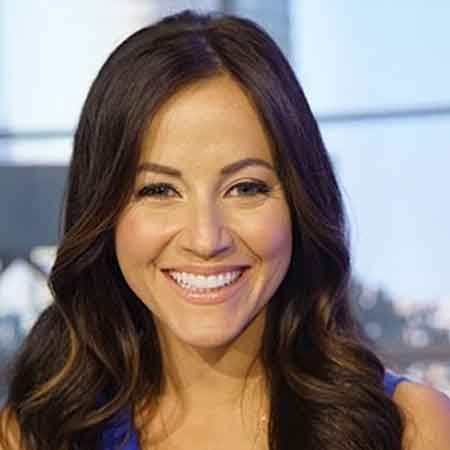 Born in Chicago, Illinois, Kay Adams is a sports personality who mainly focuses on fantasy football. As of 2019, she is the host of Good Morning Football, which is a daily morning news program that airs on the NFL Network. She co-hosts the show with Peter Schrager, Kyle Brandt and Nate Burleson from 7 am to 10 am and discuss the day’s hottest football topics.

Kay Adams was born on the 6th of April but her birth year is not available. She is originally from Chicago, Illinois. She has one older brother. Apart from this, there is no information about her childhood life, parents and education too.

Adams holds American nationality and ethnicity wise, she is from a mixed ethnical background as she is of Polish descent.

Kay Adams started her career serving as an in-game host for the St. Louis Cardinals (NFL) at their home games. However, her first work related to professional football was on fantasy football shows which include SiriusXM's Livin' the Fantasy and SiriusXM Fantasy Drive. Then she proceeded to anchor DirecTV's Fantasy Zone on DirectTV,  a companion of the NFL Sunday Ticket package.

Moreover, Adams made a guest appearance on 17 October 2012 edition of the Late Late Show with Craig Ferguson. Since 2016, Adams has served as one of the co-hosts of NFL Network's Good Morning Football with Nate Burleson, Peter Schrager, and Kyle Brandt.

The show covers Good Morning Football which is broadcasted from the CBS Broadcast Center in New York City at 7 a.m. - 10 a.m. All the members discuss the day’s hottest football topics and are regularly visited by NFL players and coaches.

Kay Adams' Net Worth And Salary

Talking about her net worth, Kay Adams earns a decent amount of money from her career as a television personality. The Bureau of Labor Statistics does not include the salary data of sports announcers, but it did report in May 2017, that radio and TV announcers earn an annual income of $32,450.

You May Be Interested in Tiger Woods, LeBron James, Michael Phelps, Serena Williams, and Venus Williams.

Talking about her relationships, Kay Adams is rumored to be dating New England Patriots wide receiver, Danny Amendola. They both were spotted together in the 2015 ESPY Awards. Though the couple has not confirmed their relationship officially there are many reliable sources, who confirmed the pair is together for many years. As of 2018, she resides in New York City, United States.

In an interview in 2016, on the Garbage Time Podcast with Katie Nolan, Adams spoke about her picky eating habits. She is also fluent in Polish. She likes to eat ketchup sometimes and does not like to eat bacon because of the smell. She also doesn't eat deli meats or meats with bones. Adams, however, enjoys eating chicken, pizza, and hamburgers.

"I'll eat chicken, a burger. I can eat more pizza than anybody"

Concerning her online presence, she is active on social networking sites including Instagram with 122K followers as of November 2018. She also loves to visit a new place and often posts her traveling pictures on her account too.

Check out her interview in the show Garbage Time Podcast.