Kate McKinnon Has a New Girlfriend, They Are Now Emmy Official! Pictures and Details 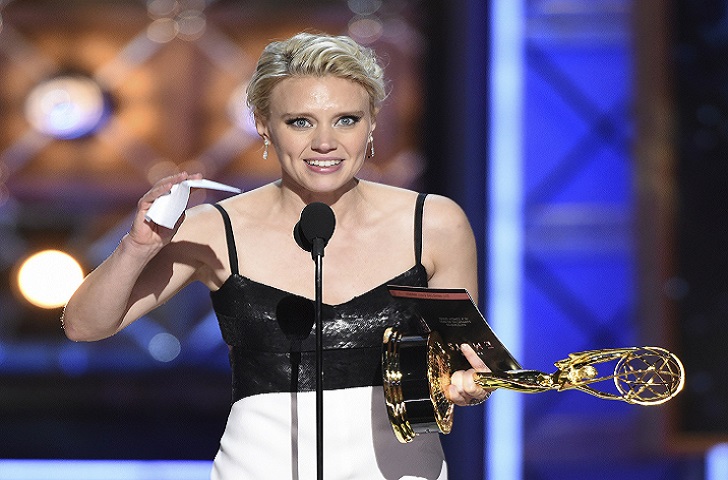 Kate McKinnon has a girlfriend who calls her ''Wifey'', did you know? The SNL's first openly gay star has confirmed her relationship with girlfriend Jackie Abbott! They were seated next to each other at the Emmys, and when McKinnon won they shared a huge hug!

Kate McKinnon Backstage At The Emmys with Girlfriend Jackie Abbott

McKinnon made her first ever official appearance with girlfriend Jackie Abbot at the 2017 Emmy Awards in Los Angeles. After the win, Abbott took to Instagram to share her support and excitement where she calls Kate her ''Wifey''

SHE WON!!!! MY WIFY WON!!! SHE HAS WORKED SO HARD AND SHE SO DESERVES IT!! LOVE LOVE YOU SO MUCH!! #Kate #mckinnon #katemckinnon #roughnight #officechristmasparty #ghostbusters #holtzmann #snl #bgss #leap #thespywhodumpedme #ucb #nino #nbc #lesbian #gay #wife #emmys #emmys2017 #2017emmys

McKinnon's new girlfriend Jackie Abbott is an artist, she is an actor and a photographer who works out of N.Y.C. Abbott was born in Stamford, Connecticut and she went to Tisch School of the Arts under New York University. She worked for Susan Sarandon and studied with Olympia Dukakis there, Abbott clearly has a quirky sense of humor like McKinnon. Abbot received Tisch Drama Award during her time at the college.

Jackie Abbott describes says she '' is as passionate as she is a goofball'', according to her website, he professors dubbed her a ''cheeky firecracker.

Kate McKinnon and Jackie Abbott were last spotted together on April 10, 2016, in New York City. The duo was seen at the backstage of the Fun/Home, a hit Broadway musical.

The 33-year-old comedian, Kate McKinnon, who was almost always in the headlines this SNL season won the Outstanding Supporting Actress in a Comedy Series. She played Hillary Clinton on SNL, McKinnon thanked the former secretary of state in her speech saying, '' Thank you for your grace and grit.'' This is Kate McKinnon's second Emmy as a part of the SNL sketch comedy group.