Karen McDougal hit the headlines early this year after she claimed that she had an affair with President  Donald Trump back in 2006. Trump, however, denied their relationship.

Though her personal life grabbed the attention of the media, she always prefers to maintain her love life under the radar. Is there anyone in McDougal's life at present? Let's uncover details regarding her love life here.

Who Is Model And Actress Karen McDougal Dating At Present? Know About Her Dating Life

Karen McDougal seems to be single at present as the 47-year-old former Playboy model hasn't confirmed anyone as her boyfriend or husband.

McDougal is fitness model and a columnist for several magazines like OK Magazine, Star Magazine, and Radar. She also owns a company, Pharmore Alternatives that provides health and wellness supplements. 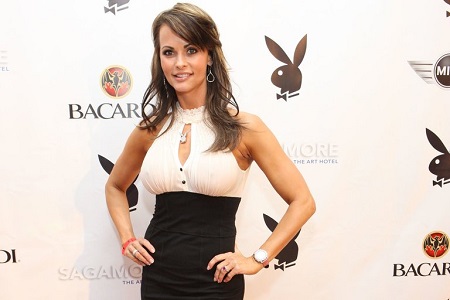 She seems to be busy in her career as she usually promotes her professional life on her Instagram.

Previously, she was in a romantic relationship with actor Bruce Willis. They dated back in 2007. The couple was spotted on several romantic dates at the time. Their courtship was short-lived and broke up in the same year.

Karen McDougal Alleged Affair With President Donald Trump: What Is The Truth?

McDougal claimed that she shared a romantic relationship with Donald Trump in June 2006 when he was still married to the first lady, Melania Trump. Their relationship lasted for about ten months.

McDougal and Trump had their first encounter back in 2006 at the Playboy party. Their romance started soon after they had a physical relationship at Trump's private bungalow at Beverly Hills hotel. 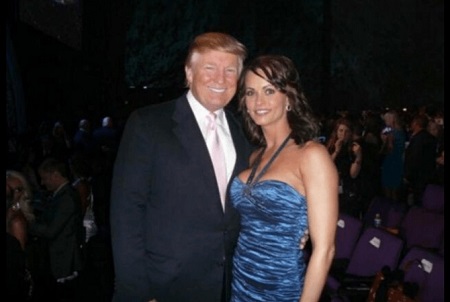 CAPTION: Karen McDougal and President Donald Trump had an affair in 2006 SOURCE: The Telegraph

The model revealed that Trump offered to pay her after they had sex.  Taking to CNN, she explained:

“After we had been intimate, he tried to pay me, and I actually didn’t know how to take that. I don’t even know how to describe the look on my face. It must have been so sad,”

The alleged couple together went to the Miss Universe Pageant and golf tournaments during their relationship and usually met whenever Trump was in Los Angeles. They separated in April 2007.

She also claimed that she signed a non-disclosure agreement with the National Enquirer for her story with Trump which was never published. The agreement worth $150,000 (£106,936) was done before the election in 2016.

In an interview with The New Yorker, she said:

She said to the publication:

"It took my rights away. I was so nervous! I was into his intelligence and charm – such a polite man. “We talked for a couple hours, then it was ‘ON’! We got naked and had sex. “He told me, ‘you are special’.”

In March 2018, McDougal sued National Enquirer to break her silence regarding her affair with Trump. In an interview with Anderson Cooper's show, AC360 in March 2018, she apologized to First Lady Melania Trump saying:

“What can you say except, I’m sorry? I’m sorry. I wouldn’t want it done to me, I’m sorry. Going through it when I look back where I was back then, I know it’s wrong, I am really sorry for that. I know it’s the wrong thing to do,”

Trump, however, has denied the affair allegation.