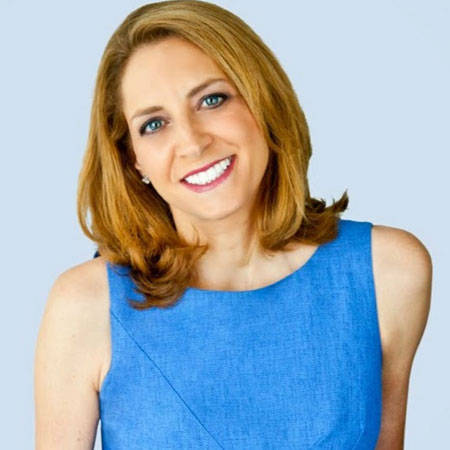 Karen Finerman is one of the inspirational female business personality of America. She is also a TV personality appeared on several TV programs. Since 1992, she is working as a president and CEO in her founding company, Metropolitan Capital.

Finerman is married to her entrepreneur husband, Lawrence E. Golub after dating for months. The couple shares four children, two sets of twins, together.

Karen Finerman was born Karen Lisa Finerman to a Jewish family on 25th February 1965 in California in the United States of America under the birth sign Pisces. She belongs to white ethnicity and holds American nationality.

As per her bio-data, Finerman is the daughter of Jame Finerman and Gerald Finerman. Her parents raised her with her siblings, three sisters Wendy Finerman (Oscar-winning film producer), Leslie Finerman, & Stacey Finerman and a brother Mark Finerman in Beverly Hills, California.

In 1983, Finerman graduated from Beverly High School. She graduated from the Wharton School of Business at the University of Pennsylvania in 1987 where she did major in Finance.

Karen Finerman co-founded the very successful Metropolitan Capital Advisors, Inc in 1996. Since then she is working as a president and CEO of the firm.

Later, Finerman became a board member of the prestigious Michael J. Fox Foundation as well as GrafTech International, Ltd. She is also a trustee of the Montefiore Medical Center.

Moreover, Finerman is a successful panelist on the very popular show, Fast Money which is broadcasted on CNBC.  In 2017, she became the founding Master Player of the Portfolios with Purpose contest.

Besides, she is also involved in writing. She published her first book, Finerman's Rules: Secrets I'd Only Tell My Daughters About Business and Life on 4th June 2013 by Hachette Boo Group's Business Plus.

Karen Finerman's Net Worth, Earnings, And Major Source Of Income

The inspirational business personality, Karen Finerman, has a jaw-dropping net worth of $100 million which proves how successful she has been in her career.

Finerman started her Hedge funds years back which worth $4 million then and now it worth over $400 million. In an interview, it was revealed that the Metropolitan Capital had over $400 million in assets. Her 2013's published book, Finerman's Rules: Secrets I'd Only Tell My Daughters About Business and Life costs $20.28 in Hardcover.

Finerman also authored a book titled Finerman's Rules: Secrets I'd Only Tell My Daughters About Business and Life which is priced $24.7 for Hardcover on Amazon.

Finerman owns a vast apartment on the Upper East Side. With such earning and assets, she is maintaining her lavish lifestyle.

Besides, Finerman along with her family supports medical research to make treatment for Parkinson's disease advance at several leading institutions.

As of 2018, Karen Finerman is 54-years-old.  At this age, she has already been on the verge of becoming legendary and all thanks go to her confidence level and presentation skills. Even after being so popular and so successful she is still very calm and down to earth and this proves what a great human being she is.

Her personal life is as perfect as her career. Finerman was dating her entrepreneur boyfriend Lawrence E. Golub before the couple decided to convert their alleged affair into a marital relationship. Her present husband is from the same profession as her. He is a Harvard College graduate who is working as a CEO of Golub Capital, a credit management company.

Finerman came to the conclusion to marry him after the proposal. Here is the video where Finerman talks about the proposal:

Later, the couple got married in a private ceremony attended by their families and friends. The husband and wife share four children, two sets of twins, together. Even after the twins, the couple never failed to fulfill their professional and personal responsibilities. The pair prefer to keep their children far from the limelight. The media personality currently resides in NYC with her husband and two sets of twins.

The couple is together for years and still free from any types of rumors about their divorce, and cheating.