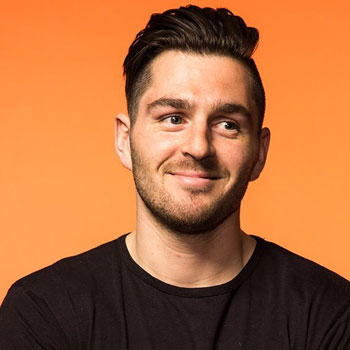 Julien Solomita is a famous and distinguished social media personality who is most popular for his self-titled YouTube channel. He has earned more than 2.24 million subscribers on his YouTube channel. Most of his videos doc u mented his life together with his girlfriend and their three dogs. The social media star previously worked as a programmer at AMP Radio studio. He was heavily involved in sports especially in baseball during his college years. He posts different kinds of videos on his channel, including vlogs, timelapse videos, short films, music videos, etc. He often puts background music by his friend Brandon Rowan, a.k.a. Birocratic, in his timelapse videos. He is also a musician known for his nightmare songs.

Julien Solomita was born on April 17, 1992, in Stanford, California, at the Stanford University Hospital. He belongs to American nationality and regarding his ethnicity, he is White American. His parents separated when he was in the first grade.

Solomita was raised in her hometown California along with his siblings an older sister named Roxanne Solomita and a younger brother named Marlon Solomita. Following his parents’ divorce, his mother got engaged to baseball coach Ted Silva. The family of five frequently goes on vacation together.

CAPTION: Julien Solomita along with his sibling SOURCE: Instagram

As a child, Solomita used to play baseball along with his older brother. He was also a part of his school's baseball team and finally became a captain in his senior year. But he wasn’t able to give continuity in baseball due to his injury in his freshman year.

Julien Solomita worked at AMP Radio studio during his soph 0re year. Then he started working as a bartender at night and at that time, he also met his current girlfriend, famous YouTuber Jenna Marbles. His girlfriend Marbles introduced him to the world of YouTube. He first featured in his girlfriend's videos and subsequently created his own YouTube channel on December 8, 2012.

As of 2019, Solomita’s self-titled YouTube channel has over 2.24 million subscribers. He gained a lot of popularity after he started uploading weightlifting videos and vlogs. He has posted different kinds of videos on his channel, including vlogs, timelapse videos, short films, and music videos.

He often puts background music by his friend Brandon Rowan, a.k.a. Birocratic, in his timelapse videos. He is also a musician known for his nightmare songs.

During his vacationing in Las Vegas, he found that he has an app on his phone which allows him to record his voice and change in different pitched beats. While playing around for some time in the app, he created a song that was very different from any genre. He has named it the nightmare song.

Solomita also runs a podcast channel along with his girlfriend under the title Jenna Julien where they mostly talk regarding different random topics. He was nominated for the Shortly Award under the category Vlogger of the Year. In addition to social media, Solomita also took training in Brazilian jiu-jitsu as a martial artist.

In the years 2014, he was won the Young Hollywood Award for Viral Superstar category. In 2017 and 2015 he was nominated in  Streamy Award for the category Audience Choice Creator of the Year and Best Comedy Series respectively.

How Much Is YouTuber Julien Solomita's Worth?

The social media phenomenal Julien Solomita has earned a considerable amount of money from his career as a social media star. As per the estimation made by various online sources, the YouTuber Solomita's estimated net worth is over $380,000. Whereas his longtime girlfriend Marbles’ net worth is around $5 million, according to Celebrity net worth.

On the other hand, Solomita is also one of the most followed celebs on her YouTube Channel JennaMarbles with over 20 million subscribers. She earns $10.2k to thousand to $163.1 thousand per month. She also has a house in Sherman Oaks that value was $3 million at the time of purchase.

Solomita owns a Honda Civic sedan worth around $19,900.

don’t ever talk to me or my son again

Solomita has been running his self-titled YouTube channel since 2012 and garnered over 2.24 million subscribers on his YouTube channel. With an average view of 220,000, he is able to generate an estimated revenue of around $400 in a day which makes $150,000 in a year from his videos.

Julien Solomita has been in a long-term relationship with his girlfriend famous YouTuber Jenna Marbles. He first met his girlfriend while he was working as a bartender at night. The couple soon began spending time together and visited different places together.

Marbles initially helped her boyfriend Solomita to become a YouTuber and the two later created a podcast channel and a gaming channel together. As of now, the couple is leading their personal and professional life hand in hand. Currently, the lovebird resides in California, Los Angeles.

Solomita is also an avid animal lover and has four dogs named Peach, Kermit, Bunny, and Marbles. He is also active on Twitter and Instagram.