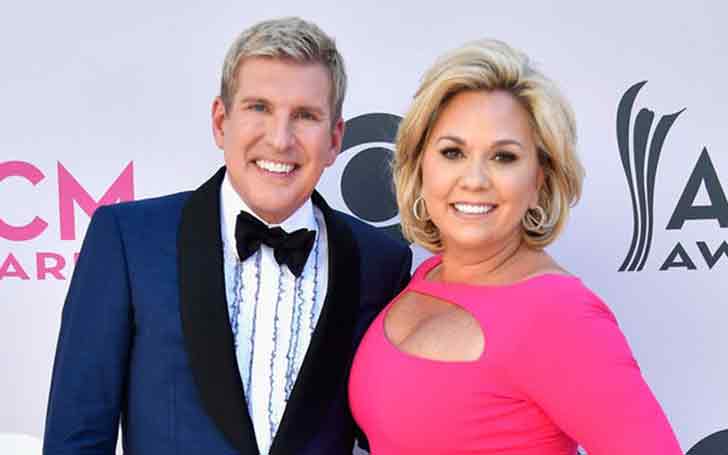 Fans have been witnessed the married life of reality star, Julie Chrisley and her multi-millionaire husband, Todd Chrisley in the USA’s hit reality show, Chrisley Knows Best since 2014. Currently, the show is in its fifth season.

Julie and Todd are married since 1996 and they are proud parents of five children. Let's get the details of their married life.

Julie Chrisley And Todd Chrisley Married Since 1996: How Is Their Married life Going On?

Julie Chrisley and her real estate mogul husband Todd Chrisley are living 22 years of blissful married life. The couple exchanged vows on May 25th, 1996. At the time, she was nine months pregnant with their child.

Soon after the wedding, Julie gave birth to a son Chase Chrisley on June 1, 1996. They together have two more children,  daughter Savannah Chrisley, born on August 11, 1997, and son Grayson Chrisley, born on May 16, 2006. 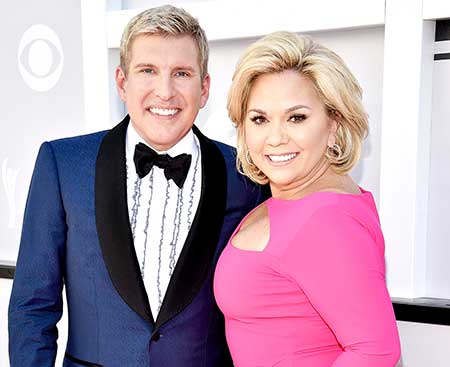 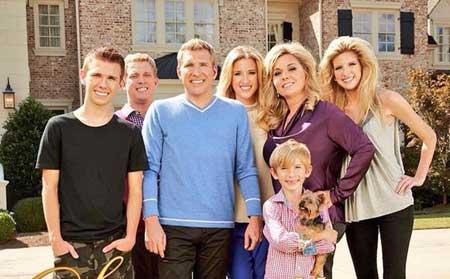 Julie and Todd along with their family were featured in USA Network reality show, Chrisley Knows Best. The show which premiered on March 11, 2014, is airing its fifth season.

The couple seems perfect on camera as Todd is a loving father and husband and Julie is a mother who enjoys cooking, however, online site Radar Online claimed that their relationship is fake revealing that they actually lead “completely separate lives!”

The insider revealed to the source:

“It is hard for anyone who works with Todd or Julie to believe that their marriage is authentic. It’s made for TV. They do not display the same level of affection and love towards each other off-camera as they do when they are filming.”

Todd “is always running around trying to be Mr. Hollywood, while Julie is the one at home with the kids making sure everything with the family goes smoothly. And even that is fake. They have a team of people underneath them at this point so in reality neither one of them have to lift a finger when it comes to housekeeping.”

Though the sources claimed that their relationship is not real, it seems like Julie and Todd share a strong bond. They often had rocky times in their conjugal life, they overcome their differences and have been together for over 22 years.

Todd also stood behind Julie and supported her when she was diagnosed with breast cancer in 2012. Things would be even more difficult for her if her husband wasn't there.

Back in March 2012, the mother of three was diagnosed with breast cancer. Taking to Hello Magazine in 2015, she opened about her health condition.

Soon after being diagnosed with cancer, she did research and discussed her situation with husband which she explained:

“I didn’t waste any time… The minute I was diagnosed, I started researching… I had to do what was best for me and my family. I didn’t want to place the burden on my children more than I had to. I had teenagers and a 6-year-old.”

Julie later got a mammogram on Todd’s request. She said:

“It was an intuition on his part. I had no family history. I did not feel anything prior. I am really glad I went when I did,” she adds. “If I had waited another year, [the odds] may not have been what they were.”

On her next interview, the reality star who is now cancer free said she feels blessed to be cancer survivor:

"It is truly been a blessing over these past three years. My breast cancer was caught very early and I am cancer-free. Over the whole process yes, there’s been some hard times but I’m blessed."

Julie also updated about her health condition on the 5th season of her show, Chrisley Knows Best.