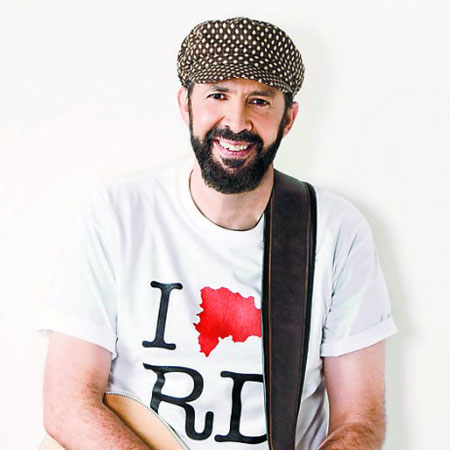 He is also one of the internationally popular Latin artists. Guerra's famous style of Afro-Latin and meringue has earned him a great success throughout Latin America.

Juan Luis Guerra was born on 7th June 1957 in Santo Domingo, the Dominican Republic to father Gilberto Guerra and mother Olga Seijas. He is of Caucasian ethnicity and holds Dominican nationality.

Upon his return to the Dominican Republic, Guerra released his debut album, ''Soplando'' with local musicians. They were later known as Juan Luis Guerra y 400. The number refers to the standard tuning of A440; the band's name is Spanish, officially Cuatro Cuarenta.

In 1984, after a performance in front of the Dominican entrepreneur Bienvenido Rodriguez, Juan Luis Guerra was signed to Karen Records.

In 1990, 440 released the album Bachata Rosa, which was one of the major hit and led Guerra to receive his first Grammy award. With more than five million sales, the album let Juan Guerra continue their tour in Latin America, the United States of America and Europe.

In 1992, Juan Luis Guerra faced controversy after he released his album  Areito. The album also featured hit single ''El Costo de la Vida'' (The Cost of Living). The video of the album has a clear anti-capitalist message.

In 1994, he released another album Fogarate. The album is focused on more rural and lesser known types of Dominican music, such as Perico Ripiao.

After six years in 2004, Guerra released his new album Para. The songs included in albums are mostly for Christian, and achieved two awards at Billboard Music Awards, in the categories for Gospel-Pop and Tropical-Merengue.

Guerra was also honored with Latino Special Award for the Music Academy of Spain for his contributions to the music of his country and the Caribbean.

During 2006 Puerto Rico show, Juan Guerra set records for the highest-grossing music tour when he opened for The Rolling Stones' A Bigger Bang Tour.

The following year, at the Premio Lo Nuestro awards in 2007, Guerra was given the honorary lifetime achievement award. The same year he released his album ''La Leave De Mo Corazon''. The album also won him more than 20 awards which include six Premios Casandra awards, five Latin Grammy awards, and four billboard awards, one Grammy Award, and two lo Nuestro award.

Juan Luis Guerra earns a good amount of money from his varied career as singer, producer, composer, and songwriter. As of 2018, Guerra's total net worth is estimated to be $45 million.

Till date, Guerra has won numerous awards and nominations including more than 15 Grammy Awards. A celebrity's salary can increase from 100-300% after receiving a Grammy award.

On 18 April 2010, Guerra organized a concert to collect money for the earthquake victims in Haiti. After the success of the event, Guerra opened a children's hospital in Haiti.