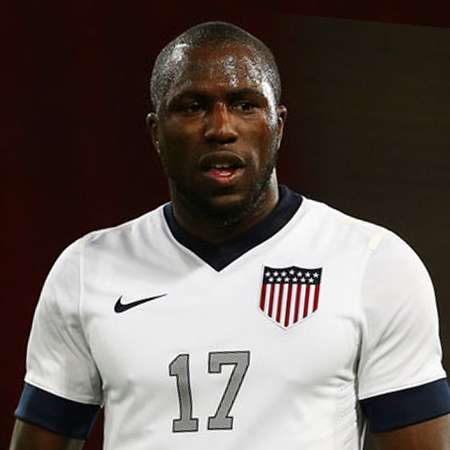 Josmer Volmy “Jozy” Altidore popularly known as Jozy Altidore is an American soccer player, born in the year 1986 November 6 at Livingston, New Jersey, USA from the Haitian-American family.  He is 24 years old having height of 185 cm and has the body weight of 79 Kg. He was born and brought up in America. He made his professional debut in the year 2006. According to the Salary statistics of 2011, his Salary is reported to be 2.2 million US Dollars. His Current Net Worth is 6 million Euros. James Grant Sports Management is the name of his agent. Jozy Altidore was a candidate for ESPN’s Next Award in 2007. He was one of the starts to be featured in Adidas “Impossible is Nothing” advertisement. He was also featured in 2008 FIFA Games by EA Sports alongside Ronaldinho and Guillermo Ochoa. He is a social activist. His social work is noted by asking for donations in the relief of 2010 Haiti earthquake. He appeared in American National News Agency CNN to urge for the donation for Haiti relief. He is the founder of Jozy Altidore foundation that ensures all children to have the opportunity to meet the success on and off the soccer field. There is a rumor that this player has a Girlfriend but still needs to be confirmed.

Jozy Altidore prefers his right foot while playing in the soccer field but performs well from his weak foot as well. He is very strong and energetic. He gives the very powerful shots. He gives fierce shots on the box. He is young and enthusiastic player. He is physically very strong having pace and acceleration. He is very agile. He often tries to beat offside traps and is marked for the power headers. He likes to play the ball in long shots. He has good positioning in the field. He has good dribbling skills. He does not like to jump to tackles. He likes to go for counterattacks.

Jozy Altidore used to play soccer from his young age. He has played for the various South Florida Teams like Boca Raton Juniors Soccer Club, Schulz Academy and Sunrise S.C before he joined at IMG Soccer Academy in Florida in the year 2004. He spent two years of his youth career at this club and moved to New York Red Bulls in 2006 from where he started his professional journey. He appeared in 37 matches from this team bagging 15 goals. In 2008, New York Red Bulls agreed his transfer in the La Liga club called Villareal. He signed three years contract with this club from where he appeared in just 9 matches bagging a goal. In between the time, Villareal had sent him on loan to Xerez in 2009, Hull City for the seasons 2009-2010 and to Bursaspor in 2011. After his release from Villareal, he joined with Dutch side AZ in 2011. He played for AZ for two seasons appearing in 67 matches bagging the record of 39 goals. In 2013, he signed with his present club Sunderland on four year contract. He is playing in the Current Team of Sunderland as a Forward from squad No.17.