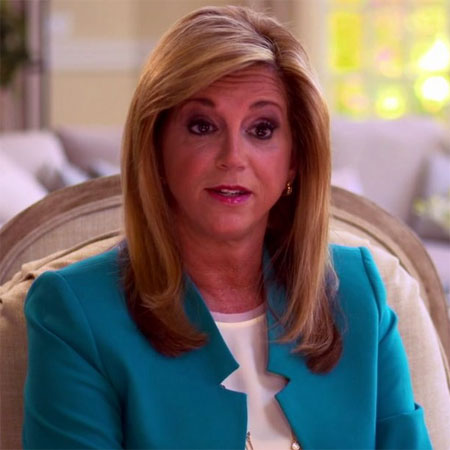 American entrepreneur and inventor, Joy Mangano is popular for her inventions mainly, the self-wringing Miracle Mop. Her other notable interventions include Little Steams, Shades Readers, Performance Platforms, Forever Fragrant, and Huggable Hangers. Mangano started selling her products on-air in 1992 and by 1999, she sold her company to Home Shopping Network (HSN). She also released her autobiography titled Inventing Joy in 2017. As of 2018, she serves as the president of Ingenious Designs.

Mangano was married to her fellow university mate, Tony Miranne in 1978. The pair has three children together. The couple divorced in 1989 but remained friends afterward.

Joy Mangano was born on 1st February 1956 in East Meadow, New York under the birth sign Taurus. Mangano is American by nationality and as far as her ethnicity is concerned,

She is Caucasian. Her Italian-American parents, Terri Mangano and Rudy Mangano raised here in Huntington.

Mangano began inventing at an early age. During her teenage years, she worked at an animal hospital in New York where she dreamed up a fluorescent flea collar to keep pets safe. The following year, a similar product was launched by Hartz Mountain.

In 1978, Mangano graduated with a business administration degree from Pace University. After graduation, she worked at various places in different posts including as a waitress, and an airline reservations manager.

Mangano holds more than 100 patents for her inventions. "I think my products have been successful because they have ma s s appeal," she has said.

"I'm just like everybody else out there. I'm a mom, I work, I have a house to clean, things to organize. We all have similar needs, and I address them."

Joy Mangano invented a self-wringing plastic mop, Miracle Mop which can easily wring out without getting the user’s hand wet in 1990. Mangano manufactured 100 units costing her $100k which was from her savings and investment from her family and friends. The product’s assembly was done in her father’s works shop in Deer Park.

With lots of boots-on-the-ground salesmanships and a little advertisement, Mangano sold thousands of the products only in the first year with the help of her family.

Along with Miracle Mop, she also invented various products such as:

Joy Mangona sold 10k units of Miracle Mop to QVC (Quality Value Convenience), a broadcast TV network after selling in local stores. In 1992 she started appearing on QVC and spent over 120 hours a year on-air. In the beginning, the product was doing an average sale but after she started on-air selling, she sold 18k mops in less than a half hour.

Nominated for the Academy Award

Joy Mangano has also partnered with several TV personalities and celebrities to bring their products to HSN (Home Shopping Network). Some of her celebrity friends include Serena Williams, Frank Sepe, Iman, and Todd English among others.

On 25th December 2015, David O. Russell released a movie, Joy which is inspired by Mangano’s life. The movies starred Jennifer Lawrence, Robert De Niro, Edgar Ramirez, and Diane Ladd among others. Lawrence was even nominated for the Academy Award for Best Actress for her performance.

In 1997, Ernst & Young named her Long Island Entrepreneur of the Year. In 2009, she was ranked no.77 on Fast Company’s list of The 100 Creative People in Business. The following year, she was listed in The 10 Most Creative Women in Business list.

Joy Mangano's net worth of $50 million. By the year 2000, Mangano earned $10 million by selling Miracle Mops. Before selling her company, she became the most successful purveyor with annual sales of over $150 million. She earned $1 million per hour during the on-air sales.

Mangano also earned a good amount from the sales of her other products:

Mangano has the 40k French country mansion on Long Island.

She owns Labrador costs between $800- $1200. She has sold the innovative mop locally in Long Island and took it to shopping channel QVC where she sold 18,000 mops in 20 minutes. She still sells $10 million worth of Miracle Mops per year.

Joy Mangano is a divorcee. Mangano was married to Tony Miranne in 1987 soon after their graduation. They met for the first time at the university. The couple shares three children, Christie, Robert, and Jacqueline.

Their first child, Christie 34, works as a senior vice-president of brand development, merchandising, and marketing strategy. Their son, Robert, 33, is a lawyer, and their younger child, Jackie, 31, is a model featured in HSN-style segments.

The couple filed for divorce in 1989 for some unrevealed reasons but they remained friends even after the separation for the sake of their children.

Here is the video, where Mangano talks about her inventions: