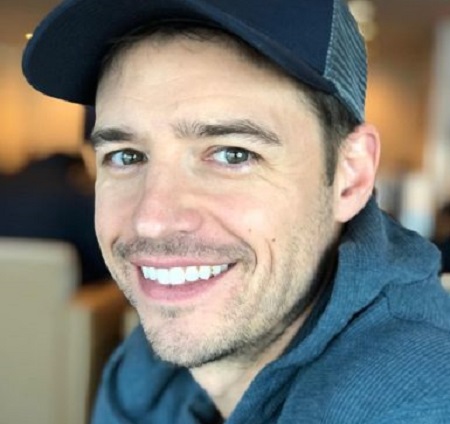 Joshua Snyder is a rising American actor known for appearing in the television shows like CSI: NY, Without a Trace, and Criminal Minds. He is also a YouTuber who uploads videos of a YouTube baking channel titled Baking With Josh.

Joshua was born on 11th November 1977, in the United States of America. He grew up in a western U.S. state in Colorado. He did not reveal the names of his parents, siblings, and educational background.

Joshua is 6 feet 1 inch tall and has a slim athletic body build.

It is not clear when Joshua began his acting career. However, he came into the spotlight for appearing in 2005’s movie Shopgirl. Likewise, he has appeared in the 2013’ movie Miss Dial.

Similarly, the actor has starred in the television series like Blackout, General Hospital: Night Shift, Criminal Minds: Beyond Borders, CSI: NY, Without a Trace, among others.

On the other side, his wife, Angela Kinsey, is a famous American actress widely known for appearing in the series like The Office, Your Family or Mine, and Hater Back Off.

Joshua Snyder’s net worth is not disclosed; however, his worth might be around $500 thousand. As an actor, he earns an average salary of $50 529. Besides acting career, he also makes a decent figure of money from YouTube.

His wife, Angela Kinsey’s net worth is $12 million.

They met in a grocery store, and during the time, he had moved to her neighborhood. After being friends for a long time, they started dating. On 4th August 2016, the actress announced engagement via her Instagram. Later, on 13th November, of the same year, they got married in Topanga, California.

Before Joshua, Angela was married to Waren Lieberstein. They divorced in 2010, claiming irreconcilable differences as the reason behind their divorce. Likewise, Joshua did not reveal whether he was married previously or not. But, his sons were born in 2008 and 2010.