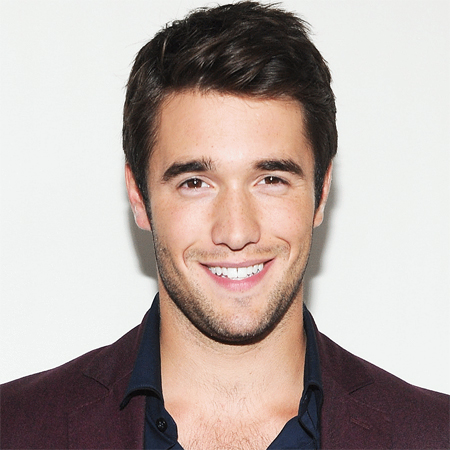 Josh Bowman is the popular British film, and TV actor, especially known for his portrayal as Daniel Grayson on the ABC hit series ‘Revenge.’ He briefly played professional rugby for Saracens F.C., before suffering two shoulder dislocations in his first year. Bowman started his acting career in 2007 in the television series ‘Genie in the House.’ He also joined the ABC's popular family show, Make It or Break It in 2011. He dated celebrities such as Miley Cyrus and Amy Winehouse.

Bowman belongs to British nationality and regarding his ethnicity; he is of mixed ethnical background. His father has a Russian Jewish descent whereas his mother has English, Irish, and distantly Italian, ancestry.

CAPTION: Josh Bowman with his mother and sister during his childhood SOURCE: Celebrity XYZ

Bowman graduated from the Willington College boarding school. At that time, he used to pay around $36,268.96 annually as a boarding fee. Following his graduation, he went on to study method acting at Lee Strasberg Institute in New York.

Bowman briefly played rugby for Saracens F.C. at the age 18. He was a friend of a rugby player, Danny Cipriani at the time. He left playing after suffering two shoulder dislocations in his first year. He studied method of acting at the Lee Strasberg in New York.

Josh Bowman debuted his acting career in 2007. He portrayed Dimitri in the television series Genie in the House. He had a recurring role as Scott James in the British medical drama TV series, Holby City (2009-2010).

Later, Bowman made three other appearances as supporting actress in movies, including ‘Prowl,’ ‘Exteriors,’ and ‘Love’s Kitchen.’ He starred as Max in the television series ‘Make It or Break It,’ in 2011.

Bowman played Nicholas alongside Miley Cyrus, among others in a 2012 movie ‘So Undercover.’ He appeared in the 2013 American fantasy film, ‘The Last Keepers’ starring Aidan Quinn, Virginia Madsen, Zosia Mamet, and Olympia Dukakis, among others.

Bowman played the role of Daniel Grayson in the ABC series ‘Revenge’ in 2011. He was nominated for Teen Choice Awards for Choice TV Actor: Drama, and Choice TV Breakout Performance – Male for his performance in the series.

Bowman played a lead role in the American fiction TV series, ‘Time After Time’ in 2017. The series was based on the adventures of a young H.G. Wells but the series was canceled in 2017.

Josh Bowman is a married man who has been married to his longtime girlfriend, Emily VanCamp. The couple started dating while they both were working together on their ABC's hit mystery drama series ‘Revenge.’

The couple who started dating from late 2011 got engaged on May 11, 2017. The actress first made a public announcement about their engagement via Instagram, posting a picture of herself showing engagement ring. They remained engaged for over a year and half before tying the knot on December 15, 2018. They exchanged their vows in a privately organized ceremony in the Bahamas. Bowman doesn't share any children with his newly married wife VanCamp.

Before, Bowman was romantically involved in a relationship with five-time Grammy Award winner and soul singing icon, Amy Winehouse during a Caribbean break in 2009. However, their romance came to an end in the same year.

Bowman made the headlines after he began dating singer and actress Miley Cyrus in 2009. The couple also worked together on the romantic comedy film ‘So Undercover.’ He and his ex-girlfriend Cyrus first met on the Caribbean island of St Lucia in January 2009.

During a break from the filming of ‘So Undercover,’ they spent quality time together in Cyrus’ hometown in LA. The pair was also seen together at Griffith Park in LA kissing each other. However, the relationship did not last long, as the two broke up in late 2010.

As of now, Cyrus is married to The Hunger Games star Liam Hemsworth. Cyrus and her longtime boyfriend, Hemsworth got married during December 2018 in Tennessee among limited wedding guests and family.

Bowman loves animal and supports the World Wildlife Fund. His favorite poem is Rudyard Kipling's ‘If’ and lucky number is 4.

Josh Bowman's Salary And Net Worth

The successful English actor is living a lavish lifestyle and has also earned a huge amount of money from his acting career. Bowman has an estimated net worth of $3 million, according to celebritynetworth.

Bowman’s girlfriend VanCamp’s net worth is around $8 million and earned $55K per episode, as per celebrity net worth. She bought her humble 1,500 square foot home for $1.2 million in October 2009 in the Hollywood Hills.

One of her successful ABC television series ‘Revenge’ scored a high rating of 7.9 by IMDb and 8.5 by TV.com respectively. Bowman also owns a Range Rover worth around $85,650.