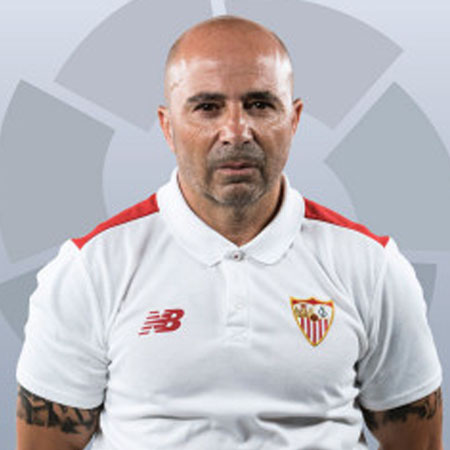 Jorge Sampaoli is the name of an Argentine football manager born in 1960 March 13 at Casilda, Argentina. Jorge Sampaoli currently Coaches the National Football Team of the Nation Chile since 2012/2013. He has got the height of 172cm and weight of 78 Kg. Jorge Sampoali has the international managerial experience of more than 14 years now. In his managerial career, his success ratio can be statistically analyzed as 56.58% wins, 23.03% draw and 20.39% losses. His net worth is estimated to be around $11 million with an annual salary around $2 million. Jorge Sampoali started his youth career from his native club called Newell’s Old Boys.

Jorge was very passionate about playing football since his young age. He used to play for amateur sides in his hometown league before joining to Newell’s Old Boys. He used to play as a Defensive Midfielder. He played for the team from 1977 till 1979. He got suffered from the injury of Tibia and Fibula, resulting in his permanent retirement from playing football at the young age of 19. Because of his passion for football, even though he cannot play, he started his managerial career from the amateur side Aprendices Casildenses in 1992.

After the four seasons at Aprendices Casildeneses, he started being the manager at Belgrano de Arequito. He led the team to the championship. During the same season, Jorge was forbidden to access to the stadium. The news was flashed in the Rosario newspaper LA Capital which drew the attention of the president of Newell who offered him with the opportunity to coach for their reserve team in the Club Argentino de Rosario. Being the experienced manager of the youth teams and the reserve teams, later in 2002, Jorge Sampoli joined the Peruvian team of Juan Aurich. After four seasons at Primera B Metropolitana in Argentina, he signed up with Chiclayo in Primera Division.

This was his first professional club career. In 2003, he managed the team of Sports Boys. He then managed the team of Coronel Bolognesi from 2004-2006. He had shown the impressive managerial skill with this team. After spending two years in this club, he started to manage the team of Sporting Cristal as a Head Coach in 2007. However, he had a disappointing year in this club which resulted in his dismissal from the club. In early 2008, he started with Chile club Deportive O’ Higgins.

The start was good enough but later turned to be a tough year for the career of Jorge Sampaoli where the team was thrashed 6-1 in the second leg of the quarterfinals of the 2009’s Apertura Playoffs. This made Jorge Sampaoli fired from the team in 2009. Later in 2010, Jorge Sampaoli started Coaching the team of Emelec. Later in 2011, he started Coaching the team of Universidad de Chile. The team won the honors of Torneo Apertura in 2011, 2012, Torneo Clausura in 2011 and Copa Sudamericana in 2011 under his management.

After seeing the success and the achievement of Universidad de Chile, Chile’s National Association of Professional Football announced that Jorge Sampaoli will be managing Chile’s National Team. After the arrival of Jorge Sampoali in Chile’s National team, the team has increasingly fancied dark horses. Their performances and results have improved. Chile has won three of the four World cup qualifiers since his appointment in the team leading the team play in 2014 FIFA World Cup in Brazil.